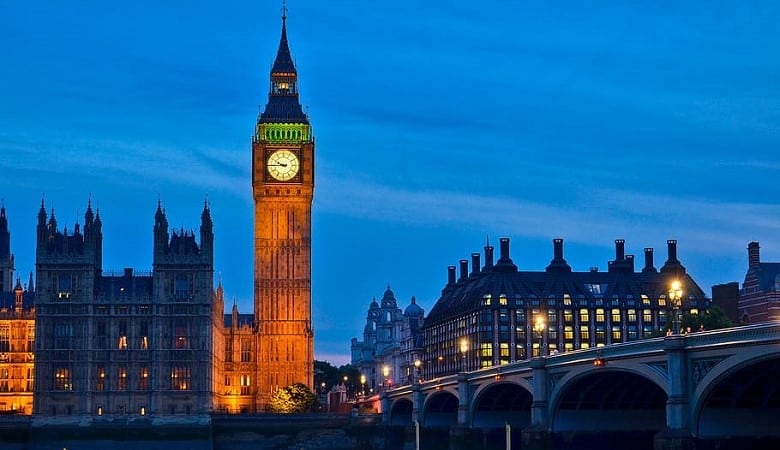 Big Ben, London’s iconic bell located within the Elizabeth tower, is visited by millions of tourists and United Kingdom residents each year and has been keeping Brits punctual since 1859. There is so much more to know about this elegant structure, and we will discuss a major common misconception about Big Ben, how the bell got its name, what makes up the weight of this grand structure, and the history and construction of Big Ben.

How much does Big Ben weigh? Big Ben, which actually refers only to the bell inside of the tower, weighs in at just over 13 tons. (13,760 kg.)

While most of us are familiar with what Big Ben looks like, there is so much more to know about this iconic structure. Read on to learn more about this alluring and often misidentified attraction.

A Common Misconception about Big Ben

When you hear “Big Ben” it’s more than likely that what comes to mind is the popular tourist attraction that sits beautifully at the North end of the Palace of Westminster; however, Big Ben refers specifically to the bell inside of the tower and not the structure in its entirety.

The tower itself is known as Elizabeth Tower, named after Queen Elizabeth II in 2012 during her Diamond Jubilee. Before the name change in 2012, the tower was known as St. Stephen’s Tower, and before that, it was known as Clock Tower.

What Makes up the Weight of Big Ben?

When asking this question, it’s important to remember that the bell that is currently in Elizabeth Tower is not the original bell. The original bell was cast of bronze, and upon completion cracked beyond repair. It was then that the Whitechapel Bell Foundry, the oldest foundry in Britain, melted down the original bronze casting and recast the bell to what it is today.

Bronze is a combination of metals that is made up of mostly copper and tin. Recasting a bell refers to the process of a foundry taking salvageable metal from the original casting, melting it down, and making a new bell of a similar size, reducing the weight.

An interesting fact about the Whitechapel Bell Foundry is that it is the same foundry that manufactured the Liberty Bell, a well-known symbol of American Independence.

How Did Big Ben Get its Name?

Frankly, people love giving big bells names, and since this particular bell was, and still is, one of the biggest in the world, it was worthy of a significant name. Initially, it was thought the bell would honor Queen Victoria, and be known as the Royal Victoria, but that name never stuck.

Some have speculated that perhaps the bell was named after famous heavyweight boxing champ Benjamin Caunt, who was also known as Big Ben. Perhaps a more logical theory is that Big Ben is named after Sir Benjamin Hall, who was working as Commissioner of the Works and oversaw the rebuilding of Parliament after a devastating fire in 1834.

Some say that on the original bell was an inscription that read: “Sir
Benjamin Hall MP Chief Commissioner of the Works,” and from then on workers began referring to the bell as Big Ben. However, there is no proof that this inscription ever existed because the bell that currently chimes in Elizabeth Tower is not the original.

The History and Construction of Big Ben

The history of Big Ben begins in 1834 when Parliament burned down. At that time the British government was given the task of disposing of a large volume of tally sticks, which had been used as an accounting system. Stoves located in the basement were thought to be a good place to burn the sticks. Unfortunately, several hours later, both Houses of Parliament and several other buildings on the grounds had been destroyed by the massive fire.

The construction of Big Ben began during the rebuilding of the Palace of Westminster following the tragic fire of 1834. Parliament decided that a large clock tower should be incorporated during the reconstruction.

Astronomer Royal George Airy required that “the first stroke of the hour bell should register the time, correct to within one second per day, and that it should telegraph it’s perfection twice a day to Greenwich Observatory, where a record would be kept.” Edmund Beckett Denison, lawyer, and amateur horologist–a person who studies the measurement of time–designed the hour bell.

The first prototype, cast by John Warner & Sons, was presented in August of 1856 and upon completion cracked beyond repair. It was after this that the Whitechapel Bell Foundry took over and made the successful casting that was completed in April 1858.

While the delays in the casting of the bell were disappointing, they weren’t at all considered inconvenient, as during this time the tower itself had to be altered once it was discovered it would be too small to house the original size of the bell.

At over 7 feet high and weighing over 13 tons, transporting the bell to the Palace of Westminster was quite an ordeal. As several teams of horses transported the hefty bell, excited groups of people crowded the streets of London. Once the bell arrived, it took several days to hoist it to
the top of the tower.

Big Ben first rang on May 31, 1859; however, due to an oversized hammer, the bell cracked once again. It wasn’t until 1862 that the bell began ringing regularly after it was turned slightly, a lighter hammer was installed, and a metal patch was placed on the bell.

For a more in-depth history of Big Ben, check out this video.

If you’re interested in the history of Britain’s oldest foundry, the Whitechapel Bell Foundry, check this out.

In 2017 Big Ben fell silent, except bonging on important national holidays, such as New Year’s Day and Remembrance Sunday. Big Ben is currently closed to tourists while repairs are being made to the roof of the Elizabeth Tower, as well as the bell frame, leaks are being repaired in the clock room, a lift is being installed, current brick enclosures are being replaced with glass, and colors are being changed to make the clock more vibrant.

While tours are not currently available, repairs are expected to be completed in 2021. Check out this video for a behind the scenes look at renovations being done at Elizabeth Tower.

What happens to Big Ben when the clocks change? When the hands of the clock, an impressive 14 feet long, are to be moved, it takes an entire team and roughly five hours to complete this task. The clock is to chime at precisely 2 AM, and the deadline hasn’t been missed yet.

How many steps are there to the top of Elizabeth Tower? There are 334 steps to the belfry, where the bells are housed, and 399 steps to the lantern, also known as Ayrton Light located just above the bell.

What materials makeup Elizabeth Tower? Materials used to complete Elizabeth Tower came from all over the United Kingdom, including cast iron girders from Regents Canal Ironworks, Yorkshire Anston stone, and Cornish granite. An interesting final fact–construction of the tower was done from the inside out so that scaffolding couldn’t be seen by those passing by.