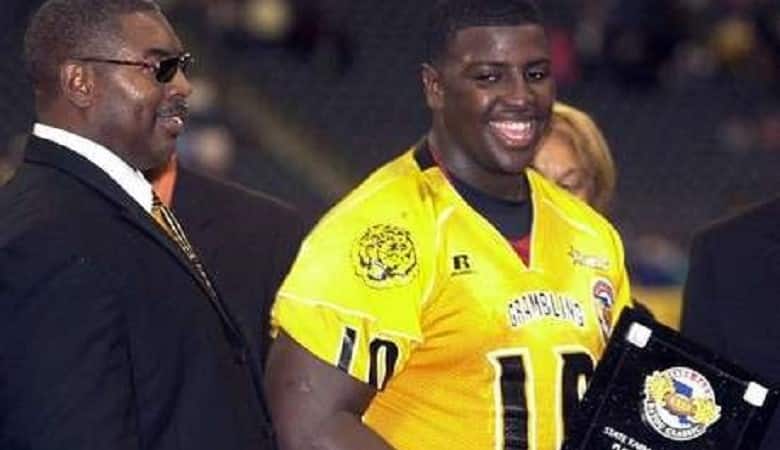 Throughout the history of the NFL, there are a lot of great quarterbacks. They are the leaders of the offense, and without them, the rest of the team would be misguided. Easily the best quarterback in NFL history is Tom Brady, who epitomizes a great leader on the field with tremendous skill to pass the ball. But he’s a relatively small player compared to some of the heaviest.

Who were the heaviest quarterbacks in the NFL, now and in history? There are other great quarterbacks that have existed in the NFL without Brady’s frame or body type. Some, in fact, were well over 200 pounds and still produced amazingly on the field:

In this article, I list the heaviest quarterbacks in NFL history, including the remarkable things that they have done on the field.

Jared Lorenzen was listed at 6’4” at 275 lbs. He was also known as the “Pillsbury Throw Boy”. He did not have a lot of success in the NFL, but he did play well in the Ultimate Indoor Football league. Later, he actually became the commissioner. In 2013, when he went back to the River Monsters he actually weighed 320 pounds. Further, he was in the same draft class as John Navarre, who had a very similar body frame and weight
from the 2004 draft. Sadly, he passed away in July of 2019 from kidney and heart issues.

Russell is listed at 6’6” and weighs in at 265 pounds. Since his tenure in the NFL, he has lost a great deal of weight. He played for the Raiders and was called one of the biggest busts in NFL history. He was drafted in 2007, and instead of losing weight to fit the quarterback build, he built more weight reaching just under 300 lbs. Further, Russell tried to come back in 2013. This attempt was not successful and has never tried out since. Despite that, he got a lot of money, setting the rookie contract salary record of
$32 million guaranteed and a $68 million cap.

Eugene is listed as 6’0” at 260 pounds. He was called the “Round Mound of Touchdown”, drafted by the Saints in the 2006 draft. Although drafted, Eugene was cut in the preseason. During this cut, Eugene really tried out his options. This included trying out for teams in the NFL, CFL, and NFL Europa. Eventually, none of those options panned out and he settled to be a
coach.

Even though he may not look it, Cam Newton is only 15 pounds lighter than some of the heaviest quarterbacks in NFL History. He was a first-round pick in 2011 and weighs in at 244 pounds at 6’5”. In 2018, he had a shoulder injury and cut his 2018 season short to 14 games. However, he had a 68% completion rate and was one of the best in his career since he was drafted. Further, he threw more than 90 yards more in his current season.

He weighs in at 231 pounds, just a tad bit lighter than Newton but one of the heaviest quarterbacks in the NFL now. Winston is listed at 6’4” and was a rookie of the 2015 draft class. His 2018 season was very shaky, and it included a suspension and multiple benchings. In fact, in 2019, he does not have a guaranteed starter position. However, he finished the season
ranked as ninth in quarterbacks for points per game.

Although he was mainly muscle, Tebow is listed at 6’3” at 245 pounds. He attended the University of Florida on an athletic scholarship and was even elected in the 2008 captain for the Gators. He also won the Heisman Trophy in 2007 and won the Gators MVP award from 2007-2009.
Finally, in the year after, he was picked up by the Broncos in 2010 and scored the longest touchdown by a rookie in the history of the team. Although he began well, he ended on a low. He finished the season with the record low completion rate in the NFL and went on to multiple teams like the New England Patriots.

McNabb is listed at 6’2” at 240 pounds. He was a player for the Eagles for 13 entire seasons. He was picked as the second pick in the 1999 draft and was a great player. In fact, he led the team to eight seasons in the playoffs, including five NFC East Division Championships, a super bowl appearance, and five NFC Championship Games. Further, he was picked to be in six Pro
Bowls and finished second in MVP voting in the 2000 season. Now, he is a sports commentator.

Ben was listed at 6’5” and weighed 240 pounds. He was drafted by the Steelers in 2004 and led them to a 14-1 record and an appearance in the AFC championship. Further, he was named rookie of the year that year. In the second season, he won a Super Bowl with the Steelers and became the youngest quarterback to win one. In 2007, he achieved a four-touchdown game to beat the Browns, 34-7. Overall, he had a great career and beat personal records again and again. In fact, he won the Super Bowl twice and
went to the Pro Bowl five times.

Daunte is listed at 6’4” and weighing in at 264 pounds. He began his career with the Vikings as an 11th pick in the 1999 draft. Before that, he was a great college quarterback for the University of Central Florida. During his career, he was picked to be in three Pro-Bowls. Five years after his draft, he had his best season as a quarterback. He set a single-season record for most yardage in NFL history for his position. Although off to an amazing start, he got a knee injury that ended his career. To finish off his career, he played
with teams like the Dolphins and Lions on shorter contracts before retiring.