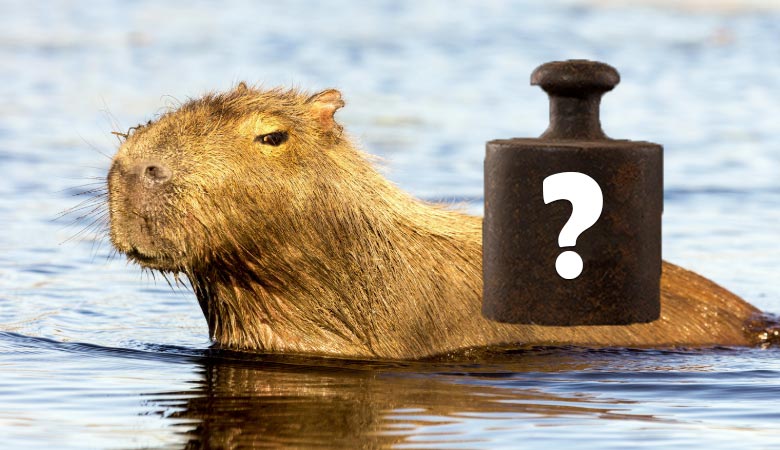 The rodents most of us are used to seeing thankfully would not rate high enough to have made this chart. Can you imagine an infestation of 200lb rodents in your house, with incisors that never ever stop growing? Because they are so large and meaty, they are often hunted.

Large rodents are crawling, jumping, and swimming all around us. They can be found in every type of terrain, and environment that you can think of. The ten heaviest rodents in the world may be animals that many may not have known are rodents at all.

Read on to find out the ten heaviest rodents in the world and a little bit about them, where they live, and what they eat.

The heaviest known Capybara, weighing in at an astounding 232 pounds. Typically, they are 200 pounds. Unlike most other rodents, the Capybara does not have a tail. However,  it does have the typical rodent trait of slight webbing of the feet. The webbing on their feet helps them to swim, with sharp claws for gripping, and digging.

Native to South America, and despite their size, there have been plenty of capybaras that are kept as house pets, as they are akin to the guinea pigs. They can grow over 4 feet long, and up to 2 feet high. In some places, they are hunted for their meat and their hide. One weird fact about the Capybara is that they consume their own feces every morning.  (Source: National Geographic)

The Castor Canadensis, more commonly known as the North American Beaver, can weigh up to 110 pounds. They are the largest rodent in North America and are semi-aquatic, which means that they spend part of their time on land, and part of it in the water.

The flat-tailed rodent has webbing on its feet and it has glands that secrete a liquid that makes the beaver’s fur waterproof. Waterproofed fur is handy for keeping warm in colder waters, and drying quickly when they come onto land. Beavers are often found in/near bodies of water such as rivers or lakes. The North American beaver can swim up to 5 MPH.

Only two species of Capybara exist. Though it may be the “Lesser” Capybara, this rodent is still ranking pretty high on the charts by weighing in at around 100 pounds.

Found primarily in Panama, the Lesser Capybara feeds off of plant materials like tree bark and grass while they are on land. When the rodent spends time in the water, it will forage for plant life underwater. They are considered to be an invasive species that is a threat to farmers and town structures.

Found all throughout Europe and Asia is the European Beaver, or the Euroasian Beaver weighs an astounding 88 pounds. It has been close to extinction due to its being hunted for its pelt and meat.

The European Beaver has also been united for the oil it secretes, which is said to have medicinal properties. This large rodent measures over 3 feet long, and almost 2 feet tall.

Also known as the Cape Porcupine, this prickly rodent can weigh over 65 pounds. They use their long black and white quills in defense if they feel like they are being threatened. You do not want to get on the wrong side of one of these guys. Don’t stand downwind of them, either. One of their defense mechanisms is a strong offensive odor.

Though they don’t look like something you would want to mess with, they are hunted by other animals, including humans. Porcupine soup, anyone? The South African is the largest of all porcupines. They have a plant-based diet and can live up to 20 years if they are in captivity.

Another one of the 29 incredible species of porcupines is the African Crested Porcupine. At 60 pounds in weight and almost 3 feet in length, this porcupine is visually striking, especially when their quills are all standing straight up.

Similar to a rattlesnake, the African Crested porcupine’s tail quills rattle when they vibrate together. This porcupine can be found roaming around a number of places like Africa, Italy, and Morocco just to name a few. They feed on a variety of plant materials and have a strong stomach for processing a wide variety of rough materials.

Weighing about the same as the Indian Porcupine at 40 pounds. They dine on all types of plant life from tree bark to flower buds. This porcupine can be found in a variety of terrain from the desert to the forest.

The final porcupine on our list is the Indian Crested Porcupine, or more simply, the Indian Porcupine. They are the same weight as the North American Porcupine, though. Did you know that a group of porcupines is known as a prickle?

40 pounds with quills that can grow up to 20 inches long. The longest quills are on the shoulders and neck. They get so big by eating all throughout the night, often up to 8 hours straight. These are a nocturnal rodent, not just a late-night snacker.

The sub-tropical native rodent called the Coypu, or the Nutria is considered to be an invasive species in Europe, mainly due to the fact that they have so few predators. Here they are preyed upon by predators like alligators. Though it is originally from South America, the Nutria have been brought to areas including North America to control the spread of weeds.

People do hunt actually Nutria. They are used for their pelts, as well as their meat. Some regions have been dealing with an infestation of them. They have been found in almost 20 states, and consume over ¼ of their body weight daily in plant matter. They have been known to destroy entire forests, miles of crops, and structures such as bridges.

The unique physical trait of the Nutria is their big orange teeth. Body length between 1-2 feet long, and a tail that grows up to 18”. This massive rodent can reach up to 37 pounds. Nutria are actually fascinating. Want to learn more? Live Science tells you all about them in this article.

Though it resembles a rabbit in many ways, the Patagonian Mara is actually a large rodent. You might even mistake the Mara for a small kangaroo. This herbivore can only be found in Argentina, near the town of Patagonia, and has a diet made up largely of grass.

With a maximum weight of about 35 pounds, this is the lightest of our heaviest rodents. With long legs and a short stubby tail, the Patagonian Mara averages about 2 feet in length. They are actually quite cute creatures.

Surely after learning about the heaviest rodents in the world, you would be curious as to what the lightest rodent is. Close to 1,000 times smaller than the world’s largest rodent, the Capybara, the Pygmy Jerboa is just a few inches long and weighs only a few (2-3) grams.

What’s so fascinating about this minute creature is that its tail can measure up to 10 inches long, over 5 times the length of its body. This just goes to show you the vast differences that exist between the rodent species.

These heavy rodents are all quite interesting. Rodents are often seen as pests, yet the truth is that they serve a purpose, just like the rest of the creatures on Earth. From big, to small, there’s a reason for them all!