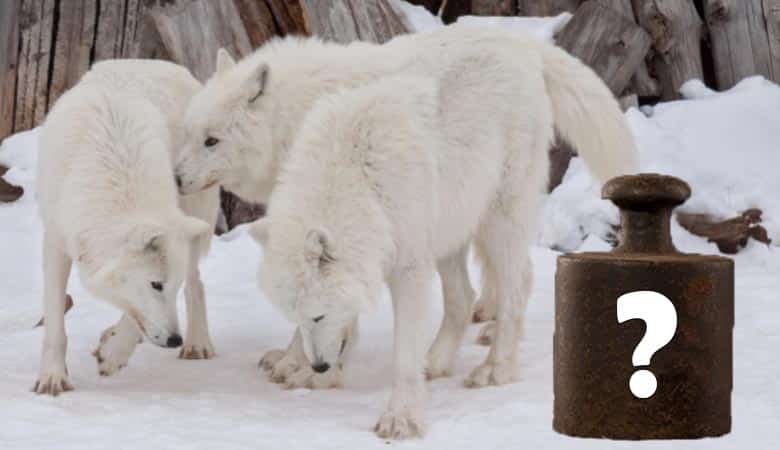 How much does a wolf weigh?

Wolves can weigh up to as much as 120 pounds. This weight can vary depending on the species, age, and gender of the wolf. Taking all species into account the general weight of a wolf is between 40 to 120 pounds.

Let’s get more specific and look at the weight of each species one by one:

There are two generally accepted wolf species, the gray wolf and the red wolf. The Abyssinian wolf and the Eastern timber wolf may also be considered third and fourth species. The classification of these wolves as separate species is under debate and can vary depending on the source.

The gray wolf (Canis lupus), also called the timber wolf, is the largest and most varied species of wolf. These are the larger species of wolf and live in northern areas around the world. In North America there are 5 subspecies, while in Europe and Asia there are between 7 and 12 subspecies, depending on the source.

Gray wolves normally have thick gray, black, white and brown bushy fur, but all white and all black wolves can also be found.

North American subspecies of the gray wolf include:

The Arctic wolf is often called the white wolf. These wolves live in the Canadian arctic and are predominantly white, to camouflage themselves in their snowy habitat. The weight of the Arctic wolf varies depending on where in the region it lives, with adults weighing a range of 90 to 125 pounds.

The Alaskan wolf is commonly called the McKenzie Valley wolf. These wolves live in Alaska and western Canada, and are the largest of the gray wolves, with the largest wolf on record weighing in at 175 pounds. The average male normally weighs between 100 and 125 pounds, and females average around 90 pounds.

once called most of the northern United States and Canada it’s home. Almost thought to be extinct in the 1920s, scientists have found decedents of these wolves living in northern Wisconsin, Michigan and Minnesota. They weight between 60 and 110 pounds.

The most endangered subspecies of wolf in North America is the Mexican wolf (Canis lupus baileyi), commonly called the lobo. Originally found throughout Mexico and the very southwestern United States, today there are less than 200 of these wolves living in the wild, and only in Arizona and New Mexico. They weigh between 60 and 80 pounds, and males are generally taller and heavier than females.

The final subspecies of the gray wolf is the Eastern timber wolf (Canis lupus lycaon). Some scientists believe this is a completely separate species, but this has yet to be determined through genetic testing. These wolves are found in southern Canada and the northeastern United States. Females weigh an average of 53 pounds and males weigh around 67 pounds.

Red wolves are smaller than Gray wolves, and look similar to both wolves and coyotes. They generally weigh between 45 and 80 pounds. Adult females average 50 pounds and adult males average 60 pounds. Historically living throughout the United States from southeastern Texas to Pennsylvania, these wolves can now only be found living in one spot in the wild, located in North Carolina, in the Albemarle Peninsula.

The Abyssinian wolf or Ethiopian wolf (Canis sinensis) is another wolf species that is still being debated. It lives only in eastern Africa, in Ethiopia, and is also endangered, with less than 440 wolves remaining. This small wolf weighs between 24 and 42 pounds.

Wolves generally have similar gestation periods of approximately 63 days. Females give birth in the spring to up to 6 pups at one time, with average litters having between 4 and 6 pups. Wolf pups are born blind and deaf and weigh about 1 pound at birth. By the time the pups are six months old, they almost reach their full adult size and weight.

There are some unverified tales of an adult male timber wolf killed in Alberta with a wide range of weights attributed to the wolf. These tales say it was killed after attacking a bear and include it weighing up to 600 pounds. Wildlife experts say it probably weighed around 235 pounds.

The largest wolf previously on record was a 175-pound Alaskan wolf.

The weight of wolves can vary widely depending on the species, subspecies, and between males and females. The most common wolf species, the Gray wolf, weighs between 50 and 125 pounds and varies depending on subspecies and location.