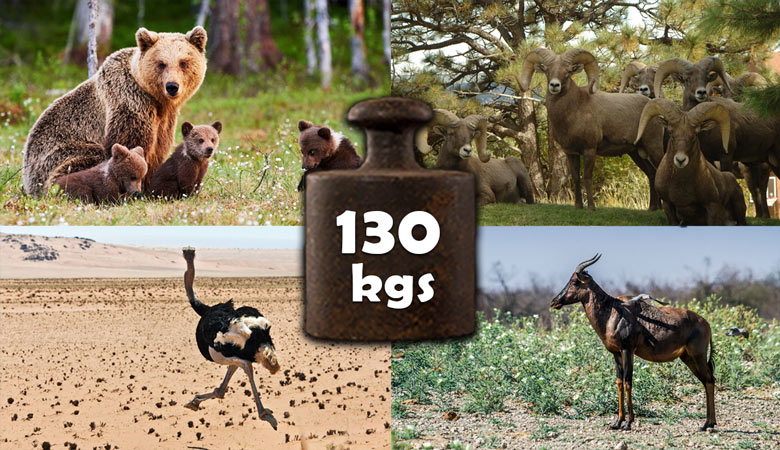 Animals are fascinating creatures. They are a natural part of our landscape.

They share so much of the world with us, yet it is so little we know about so many of them.

They come in various shapes and sizes, and have their own uniqueness, just as humans do.

In this article, we are looking at ten animals that weigh around 130 kg. That may not sound like a lot, but it’s a whamming 286 pounds.

Animals’ weights can vary based on their habitat and natural surroundings. These animals, at any given time, can weigh around 130 kg. The ten animals we’ve identified include:

The Arapawa pig is a feral breed of domestic pig from New Zealand. It has reverted to a wild type that is quite hairy and has a mane.

They often have black patches, long faces, and snouts with small and pricked ears.

Their shoulders are wide, and the boars have a heavy shield, and their skin is thick and hard. The average weight of the mature boars varies from 120 kg to 180 kg.

The weight of a black bear can be tricky. Its weight can change depending on its age, sex, health, and season.

While it’s tricky to pronounce, adult males typically weigh anywhere from 57 kg to 250 kg. Females weigh 33% less at anywhere from 41kg to 170 kg. At any given time, either sex could weigh 130 kg.

The grizzly bear is a subspecies of the brown bear inhabiting North America. Most adult female grizzlies weigh as little as 130 kg. The males are much larger weighing as little as 180 kg.

The average total length in this subspecies is 198 cm, with an average shoulder height of 102 cm and hindfoot length of 28 cm.

In the Yukon River area, mature female grizzlies can weigh as little as 100 kg, with the average weight for adult females being 136 kg. Again, the weight for the male is much heavier.

Their average shoulder height is 135 cm, and horns are 60 cm long. Hartebeests have a good sense of hearing and smell. However, not that good a sense of sight.

They can reach a maximum speed of 55 km/h on foot and tend to run in a zigzag pattern to avoid being captured by prey. Their life expectancy is about 19 years.

The adult size and weight of a wild boar are largely determined by its environmental factors. Boars living in arid areas with little productivity tend to be smaller than their counterparts inhabiting areas with lots of food and water.

That brings us to Western Europe and Central Europe where the female boars weigh around 260 pounds (120 kg). That is the only area where wild boards come close to this weight class. The male bores in this same area weigh 440 pounds.

Humpback dolphins are characterized by the humps and long dorsal fins found on their backs.

They are coastal and can be found along the coast of Arica and India south to Australia.

The dorsal fin of the humpback dolphin is somewhat curved. It also has pectoral fins that are considerably small. On each side of the jaw are 30 to 34 small coned-shaped teeth.

The ostrich is a large flightless bird found in the open country in Africa. It is the largest living bird and is fast, with the ability to run up to 43.5 mph.

Rams are male bighorn sheep that live in the mountains. Not to be confused with mountain goats, rams can be identified by their long, curved horns, long fur, and split hooves.

The normal range of physical dimensions for a brown bear is a head-and-body length of 1.4 to 2.8 m and a shoulder height of 70 to 153 cm.

The smallest brown bears, which are females, are so small in comparison to some of the larger bears. The weight of the small female is 135 kg, whereas the male is almost twice this size.

The Tsessebe is a subspecies of the Africa antelope. Tesessebe’s can be found in Angola, Botswana, Namibia, Zimbabwe, Zambia, and Swaziland, and is the fastest antelope in Africa.