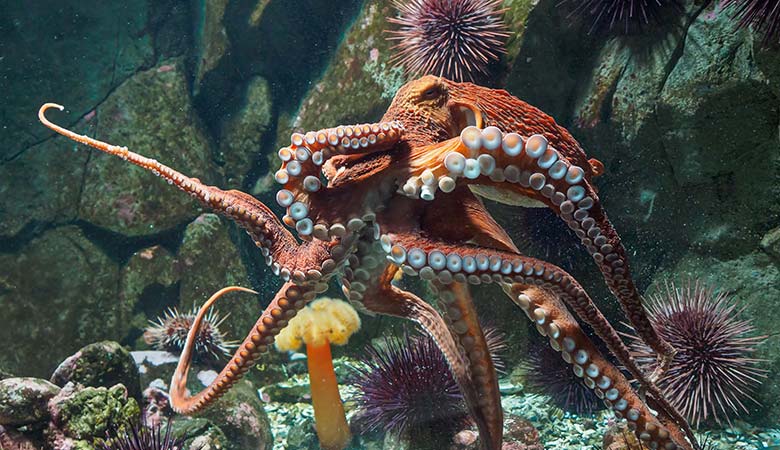 You might be surprised to learn how much 100 pounds really is in the animal world. The weight of a particular animal can be deceptive. Have you ever had a dog jump up to greet you, only almost to knock you to the ground?

This got me thinking, which animals weigh around 100 pounds? There is a wide variety of animals that weigh about 100 pounds; everything from mammals, like some species of bears, to reptiles like the komodo dragon.

Here’s a list of some of the more exciting and surprising animals I found that are close to that weight.

The smallest species of wolves reside in the Middle East. An adult Arabian wolf might reach 30 pounds at its heaviest. To learn even more about Gray wolves and other species, check out this great resource.

Also known as cougars, panthers, and pumas, mountain lions are a formidable animal to come across on a hike. Adult males tend to weigh 110-180 pounds. Female mountain lions weigh about 30-40% less than the males, growing up to 80-130 pounds.

They are beautiful, but dangerous animals and shouldn’t ever be harassed or played with. Mountain lions can leap 15 feet up a tree and can reach 50 miles per hour during a sprint. Thankfully, humans aren’t in the mountain lion diet and tend to avoid us.

When I think of bears, I can’t help but think of the formidable figure of the brown bear catching salmon in Alaska. Their average adult weight is 700 pounds, but there are a few species of bears that weigh around 100 pounds.

Dolphins are another animal whose weight varies greatly depending on the specific type of dolphin. There are a few species that weigh over 1,000 pounds fully grown, but there are quite a few smaller species whose adult weights are closer to 100 pounds.

The idea of a 100-pound rodent sounds more like fiction than fact, but Capybaras are rodents that can weigh anywhere from 77 to 145 pounds. Their size is relative to a Labrador, but they are more closely related to guinea pigs.

They are trainable animals and are occasionally kept as pets. For more interesting information about capybaras, click here.

Komodo dragons are the largest living lizards in the world. They weigh about 150 pounds fully grown but can expel the contents of their stomach to decrease their weight for a quicker get-a-way.

Their stomachs are quite expandable. An adult Komodo dragon can consume up to 80% of its body weight in a single meal. Male Komodo dragons tend to be larger than females, the largest recorded one weighing 366 pounds. Source.

There are plenty of hefty birds in the world, but none that weigh close to 100 pounds are going to be soaring over your head. You may see some of them face-to-face at the zoo. Check out this list for more heavy-weight birds, both flying and flightless.

Most snakes aren’t going to outweigh the average toddler, but some species can grow to immense weights. Some of the larger species include:

Growing up to 12 feet and 189 pounds, Galapagos sharks are actually one of the smaller shark species alive today. Although they are technically considered dangerous sharks, they rarely attack humans.

You’re much more likely to see these curious sharks in a group, checking out people, other animals, or objects in the ocean like boats and docks by bumping into them with their noses. Source.

Some dog breeds are likely to weigh about the same or more than their owners. There are many large dog breeds, but I have a table below of a selection of them and their respective weights. Source.

Adult giant pacific octopus can weigh up to 110 pounds, with a relative size of a 6ft tall man. The largest known octopus recorded weighed in at over 600 pounds.

Although they are highly intelligent animals, they are also sensitive to changes in their environment. They are not listed as endangered yet, but their numbers do seem to be dwindling. To learn more about these amazing creatures, check out this website.

Our closest primate relatives typically weigh 70 to 130 pounds. Males are usually larger. We share 98% of our genetic blueprint with chimpanzees. They are commonly found in the African rain forests, woodlands, and grasslands. Source.

I didn’t think of hyenas as large animals until seeing how much the different species of hyenas weighed. Their weights are comparable to some large dog breeds, although hyenas do not belong to the dog or cat family.