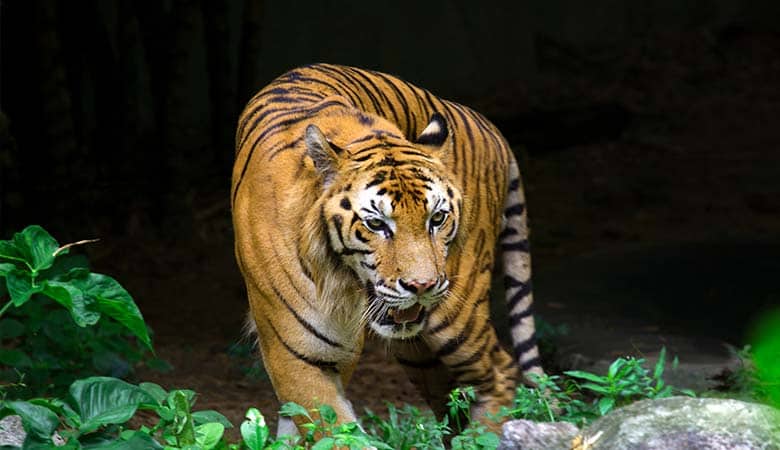 Interestingly, the animals gender also has a large influence on their weight. In most cases, females are smaller than males. An animal’s habitat and diet can also influence their size.

Among the eight species of bear, only two of them range within the 400-pound category. Those bears include the American Black Bear and the Asiatic Black Bear. In the bear families, the females are smaller than the males.

The American Black Bear (Ursus americanus) female weighs between 100 to 400 pounds, whereas the males weigh from 160 to 650. Most black bears found in eastern populations tend to be larger than their western counterparts.

They live in forested habitats ranging from Northern Mexico to over 40 states in the USA and most of Canada.

American black bears eat a variety of foods, including green vegetation, berries and nuts. They also prey on salmon, deer fawns, moose calves and elk. These bears are omnivorous, meaning they eat plants and meat.

Some additional names they go by depending on their coat color during the seasons:

Asiatic Black Bear (Ursus thibetanus) males range from 220 to 440 pounds. As in most species, the females are smaller. These bears are smaller, but in comparison to the other six living bear species, they are more closely related to the American Black Bear.

These bears inhabit forested areas in mountainous and hilly areas. They can be found throughout Southern Asia, Northeast China, Far Eastern Russian, and Japan. These animals spend their time in higher elevations during the summer and lower during the winter.

The Asiatic Black bear shares a similar diet of the American Black Bear. They dine on invertebrates, small vertebrates, fruits, buts, nest of bees, and insects. Also, making them carnivores.

Red Deer (Corvus elaphus) is known to be one of the larger deer species. Their weight varies by gender. The males tend to be larger than the females. Males weigh between 350 to 530 pounds. While females weigh around 260 to 370 pounds.

They inhabit most of Europe, Western Asia, Central Asia, Iran, and the Caucasus Mountains. It is also the only deer species to live in Northwestern Africa. Additionally, red deer are being introduced in other areas of the world, like the United States and Canada.

Red Deer are herbivores. Their diet is maintained by feeding on grasses, dwarf shrubs, and rushes.

Reindeer (Rangifer tarandus) are commonly known as caribou in North America. The males are often called or referred to as bulls. They are typically larger, weigh 351 to 401 pounds.

The subspecies of reindeer include:

They range in weight classes per subspecies. Svalbard is known to be one of the smaller species, while the larger subspecies is the Finnish Forest Reindeer.

These animals are herbivores. They eat leaves of flowering tundra plants, willows, and even mushrooms. They will also consume lichens, grass-like plants, and small shrubs.

Scientifically known as Panthera leo. The lion is large and powerful. Males are larger than the females weighing around 386 pounds in East Africa, 411-496 pounds in South Africa, and 350-420 pounds in India. Their territory ranges, as does their weight, from Africa to India.

Lions are known to be an apex predator who inhabits savannas and grasslands. They are carnivores. They hunt in social groups called prides. In most cases, the lioness, or females hunt together primarily on large mammals.

The tiger family, Panthera tigris, has a few species:

Each species has a different weight class. The female Bengal Tiger fulfills the 400-pound category.

Tigers are endangered, but the Bengal is the most numerous across the territory that stretches from Russia Far East, all the way through parts of China, North Korea, India, and South East Asia, even to the Indonesia island of Sumatra.

Tiger are carnivorous, surviving on prey that includes deer, wild pigs, and porcupines. They usually avoid larger mammals but have been known to take on elephants and adult water buffalo.

Adult pigmy hippos (Choeropsis liberiensis) weight can range between 397 and, on the larger end up to, 600 lbs. The essential share the general form as a hippopotamus, but on a much smaller scale, Although pigmy hippos have adapted to become more land-dwelling, they are still very aquatic loving animals.

Pigmy hippos have a small range located on the inner portions of West Africa. Common to Liberia, where they are illegally hunted for food in Liberia. They are primarily threatened due to their loss of habitat and poaching.

These animals are herbivores, eating dense plant forestation. Their food source is becoming endangered by logging and deforest industries.

Bottlenose dolphins (Tursiops) are most common of oceanic dolphin, of the family Delphinidae. Males are known to be larger and heavier than female dolphins. While not all dolphin’s species classify for this weight range, male Bottlenose dolphins weigh between 440 to 1,100 pounds.

Irrawaddy dolphins, also know as Orcaella brevirostris are another oceanic dolphin that weigh around 400 pounds. They are described to fit the weight class ranging from 200 to 400 pounds at full maturity.

The Irrawaddy dolphin indulges on fish eggs, cephalopods, and crustaceans for their diet.

Although, no wide range survey has been conducted for this endangered species, they have been found near seacoasts, rivers, and estuaries in the Bay of Bengal and Southeast Asia.