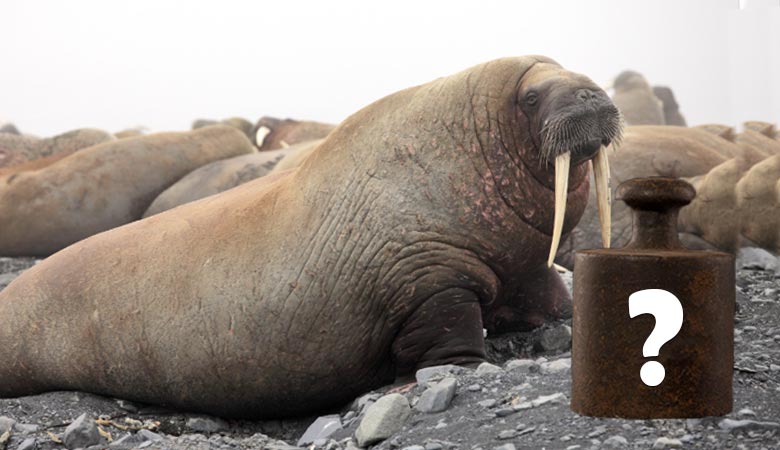 The walrus is a massive mammal and can weigh up to 1.5 tons. They’re able to survive freezing Arctic temperatures, and with their huge husks, are easily distinguishable.

These massive creatures have many unique features that help them adapt to frigid northern climates. Their massive tusks are multi-purposed, and their bodies have many ways of adapting to the cold.

There is only one specie of walrus, but it is divided into two main sub-species, with a third sub-species still being discussed by scientists. The sub-species are divided geographically.

Atlantic walruses (Odobenus rosmarus rosmarus) live along the coasts of Greenland and northern Canada. Pacific walruses (Odobenus rosmarus divergens) live in northern coastal areas of Alaska and Russia. The third sub-species, the Laptev walrus, lives in the Russian Laptev Sea. Scientists debate about if this walrus should be a sub-species of its own, or lumped in with the Pacific walrus.

The huge tusks that walruses are known for are actually canine teeth and can grow up to 3 feet long. These huge tusks can weigh up to 12 pounds and continue to grow throughout their lives.

Walruses use their tusks to help pull themselves out of the water and onto land, as well as to break breathing holes in the ice. Males may also use their tusks to defend their territory or protect their females (cows) during mating season. Males generally have longer, straighter and

During the southward spring migration, female walruses give birth to their calves after gestation periods of 15 to 16 months. The newborn calves weigh between 100 and 165 pounds and can swim as soon as they are born. Most females give birth to just one calf at a time, but twins do occur, although rarely.

Part of the enormous weight of the walrus is made up of blubber, which can be up to 6 inches thick under the walrus’s skin. This thick blubber helps protect them against the cold Arctic temperatures, both above and in the water. The walrus is also able to slow it’s heartbeat down in cold water, which allows it to survive in freezing temperatures.

Walruses appear hairless, but actually have a coat of very short hair, which grows up to about half an inch long. The hair grows all over the body, except on the flippers. The hair is the shortest on the face.

Although walruses are not very quick on land, they are very agile swimmers. Their average swimming speed is 4.35 miles per hour, and they can read speeds of up to 21.75 miles per hour. When not swimming, walruses generally sleep or rest on beaches or ice. They can swim as deep as 100 meters to feed on shellfish but generally swim in the 20 to 30 meters deep range.

Walruses are herd animals and are actually divided into male and female herds. Young males join the male herd at 3 years old. Heard dominance is established through tusk length, body size and age.

Walruses are carnivores, but their main food of choice is clams. They use their whiskers to find the shellfish on the bottom of the ocean floor and can eat up to 4000 clams in one feeding.

The walrus was almost hunted to extinction in some parts during the 1950s. During the 1980s, the population was increased to a thriving number. Currently, only Native peoples of the Arctic are permitted to hunt the walrus. They hunt the walrus for their hides, food, bones and ivory tusks.

At this time climate change and habitat loss are greater threats than hunting.