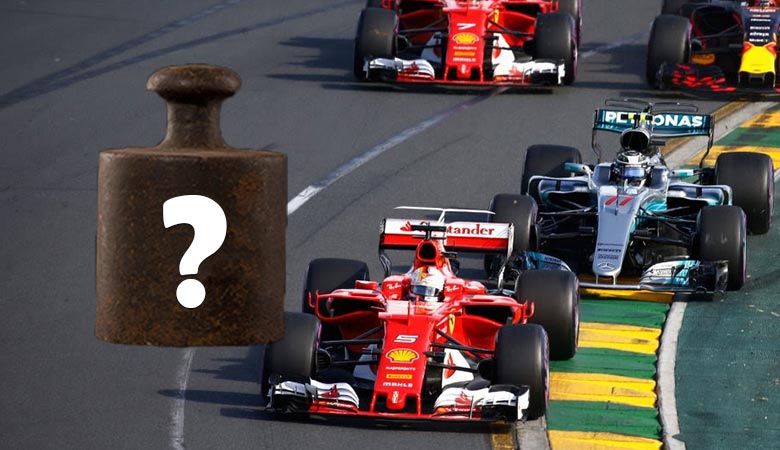 Formula One racing has been going on since 1950. It’s the highest class of international single-seater auto racing and its season consists of a series of races, which take place worldwide on purpose-built circuits and on public roads.

Formula One cars are the fastest regulated road-course racing cars in the world.

How much do these cute, compact-looking vehicles weigh? The minimum weight is a whopping 740kg or 1,631 pounds. We’ll look at 3 things that impact the weight of the vehicle along with its history.

Formula One racing is the principal form of motor sport, usually associated with the thrill and excitement of speed racing.

The set of rules that the participating cars and drivers must follow is where the name ‘Formula’ comes from. It originated in the 1920s, but after World War II, a new formula was agreed upon and in 1946 it became Formula One.

There are three features about a Formula One race car that distinguishes itself from most other vehicles, and that is the fact that is an open-wheel, open-cockpit, and single-seating racing car.

It has a front and a rear wing, and the engine is positioned behind the driver. A Formula One car is composed of four main components that include the chassis, the engine, the steering wheel, and the front and rear wings.

The chassis is the load-bearing framework of the vehicle or the vehicle frame. It supports the car so that it’s able to function in the capacity it was meant to.

Formula One cars are made from carbon fiber and ultra-lightweight components. The weight of the car (740kg) includes the weight of the driver and the tires, but not the fuel.

The dimensions of the vehicle must be at most 180 cm in width and 95 cm in height. Race teams are required to build the chassis themselves.

In the early years independently-owned Formula One teams sometimes built their own engines; this changed in 2007.

In 2014, all Formula One cars became equipped with 1.6-litre turbocharged V6 engines. The turbocharger weight is 18 pounds.

The steering wheel of a Formula One car performs many functions like changing gears, adjusting fuel/air mix, changing brake pressure, fuel adjustment, and manning the radio.

The LCD screen displays important stats during the race such as engine rpm, lap times, speed, and gear. The steering wheel itself can weigh about 1.3kg or nearly 3 pounds.

Formula One cars are low and wide to decrease air resistance; wings help with this effort. Wings for the Formula One car first appeared in the 1960s, and run on the same principle as airplane wings, but in reverse.

As the wings on a plane help the plane in going up into the air, the wings on a Formula One car helps to keep the vehicle low, to hold the car onto the track.

The angles of the front and rear wings adjust to give the vehicle the ideal balance it needs between air resistance and down force, with the rear wing weighing about 24 pounds.

Formula One drivers are among some of the most fearless drivers to auto race. The high speed of the cars as they excel along the tracks combined with the blood rush and anticipation of the fans watching, makes for an entertaining and breathtaking event.

The drivers lives are always at stake, or at risk of bodily harm. To get to this level of driving, it takes years of experience and lots of capital. Some steps drivers have taken in the past to become Formula One drivers include:

A driver’s weight plays a crucial role in the overall weight of the car. The car must meet minimum weight requirements with gear, and that includes the driver.

Recently, regulations were made to stipulate that out of the required 743kg weight of the car, 80kg of that weight must belong to the driver, his seat and his driving equipment, such as helmet, gloves, and suit.

This is a disadvantage to any driver that weighs more than 175 pounds or who may be tall. Regulations also require drivers lighter than 80kg to bring themselves up to weight by adding stability with the use of ballast.

Two pounds of weight equals about .035 seconds a lap on an average circuit, which means a smaller driver who weighs 150 pounds is at an advantage over a taller one who may weigh 163 pounds, to the mark of 0.2 seconds a lap. This is because the team may not be able to reduce the car by the amount of their weight difference.

A taller driver is at a disadvantage because his weight is high up in the car, which also affects center of gravity and therefore performance.

A formula one car is capable of going from 0 to 99mph and back to 0 in less than five seconds. They are fast in a straight line, and they have outstanding cornering ability.

The combination of light-weight, power, and aerodynamics, and ultra-high-performance tires is what gives the Formula One car its high performance ratings. The principal consideration for Formula One designers is acceleration and not speed alone.