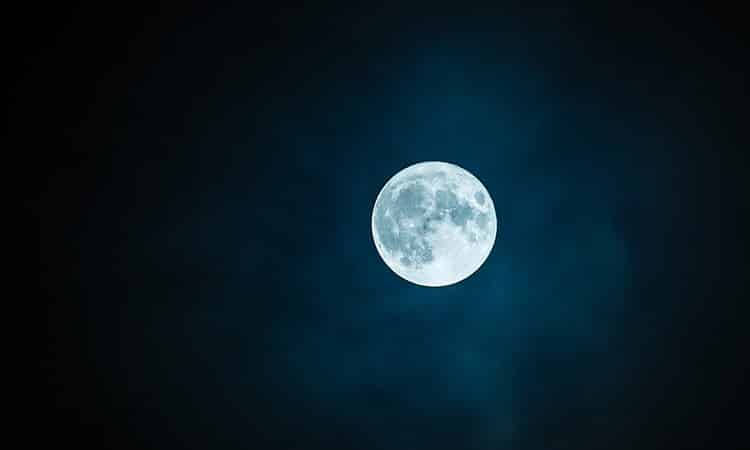 According to Engineering and Science, the amount of force exerted on an object is termed as its weight. The force is always directed towards the center of the Earth. Weight is measured in Newtons and a mass of 1KG (2.2 lbs) has a weight of 9.8 N on the earth’s surface.

How much does the moon weigh? The moon doesn’t have weight because it is moving freely through space. Although it is not subjected to the force of gravity, the moon has mass. We can use the same mass to find the weight of the moon which is estimated as 7.3477×1022 Kgs. This is equivalent to 73.5 million metric tons and is the figure we will have to register on a weighing scale if we were to bring the moon to the earth’s surface.

The moon doesn’t experience the same level of gravitational force that we experience here on Earth. It is in an orbit and is always falling towards the earth but at the same time casting away. For every single meter is falls closer to Earth, it also moves away from the surface of the Earth and tends to curve away another meter. It constantly revolves by going round and round.

It is considered the only clearest star in the sky and a natural satellite. The distance between the earth and moon is estimated to be about 384,400 kilometers (238,855 miles) away.

The moon has a very small mass compared to that of the Earth (about 1.2%). Its size is about 0.27 times the size of the planet Earth.

There is one thing to keep in mind. Your weight on Earth will not be the same in the moon. It will be approximately a 1/6th of your actual weight while here on Earth. The reason why your weight changes when on the moon is due to the low gravity on the moon. Any object on the moon’s surface will weigh about 0.165 times its weight. The difference is thought to be brought about by the mass. Gravity is determined by mass. Therefore the more the mass, the higher the gravitational pull.

The size, gravity, and weight of the moon

The gravity of the moon is about 0.165 times that of the earth. If you jump 10 feet here on earth, on the moon you’ll jump up to 60 feet. The gravitational forces existing between the Moon and the Earth have very fascinating effects.

One of them is tides. It is believed that the gravity of the moon is quite strong on the side that is near to the Earth compared to the other side. The oceans on the surface of the earth are not that rigid. They appear to be stretched out especially along the line next to the moon. In fact, we can see two bulges, one towards the moon and the other one on the opposite side. The effect of the moon’s gravity is felt more on the oceans than on the crust. This is why the seawater appears to bulge out.

Further, since the Earth’s rotation is quite faster than that of the moon, then the bulges can be seen moving once per day around the Earth. It, therefore, causes 2 high tides every day.

Since the Earth isn’t purely fluid, its rotation tends to bulge the points directly below the moon. The force between the two bodies produces a torque on the surface of the earth and a slight thrust on the moon. The effect results in a difference in rotational energy where the Earth is slowed for 1.5 milliseconds in about 100 years. The moon is also raised into a high-level orbit (3.8 cm/year). The two interactions bring about an asynchronous type of rotation for the moon. This is why it appears to stagger a bit because of the non circular rotation.

What makes up the moon and its weight?

Initially, scientists thought that the dark stretches that can be seen on the surface of the moon are oceans. The moon is quite unique. The heavy materials are located deep inside while the lighter ones are superficially spread. At the surface are asteroids. The heavy rocks were thought to have been deposited due to the massive bombardment that made them crash on the surface.

Its crust is composed of rocks that are covered with regolith. There are claims that meteorites together with asteroids collided the blasted into tiny pieces that settled on the surface. The moon’s crust extends to about 60 to 100 km (37 to 62 miles) in thickness. The regolith, which is found at the outer surface is very shallow (only 3 meters or ~10 feet).

Inside, there is crust, core, and mantle. There is an iron core engraved in soft, molten iron. The external core extends out up to 500 km (310 miles). The inner core is small and makes about 20% of the moon, unlike the rocky bodies that occupy half of it. A huge part of the moon’s interior is composed of the lithosphere, a layer that extends up to 1000 km (621 miles) in thickness. It is thought that it is the lithosphere that melted thus producing heat that expelled magma which created the plains of lava at the moon’s surface. This was after the magma cooled down and solidified leading to volcanoes found on the moon.

There is no atmosphere on the moon. However, there is evidence from Clementine, a researcher who says that there is ice in certain deep craters next to the moon at the South Pole. The water ice appears like permanent shades. Other reports show that the same ice is available at the North Pole.

To most of us, the moon appears too small just like the size of a tree. This might be due to the expansive space on the horizon. We can even think you can hold it in your thumb. This tendency has been termed has moon illusion. It appears thinner on the sides that face the earth and somehow thick on the opposite side. Scientifically, the moon is weightless but has mass. It revolves freely in space and is not affected by the same gravity as the one on earth.

What is the average temperature in the moon?

Does your weight on the moon change?

Yes. Your weight will change while you are on the moon. Your weight changes depending on the gravity. To determine your weight on the moon, you have to multiply it by 16.5% or 0.165. It means you’ll become light when on the moon than on earth. The difference is brought about by the high gravitational pull on the earth.

Can a human being live on the moon?

Human beings cannot live on the moon. Even if they wear protective gears needed for survival, the moon still doesn’t provide sufficient oxygen for human survival. Additionally, the temperatures in the moon are extreme. They are too hot and too cold compared to the earth. There is also a protective atmosphere on the earth which the moon lacks.