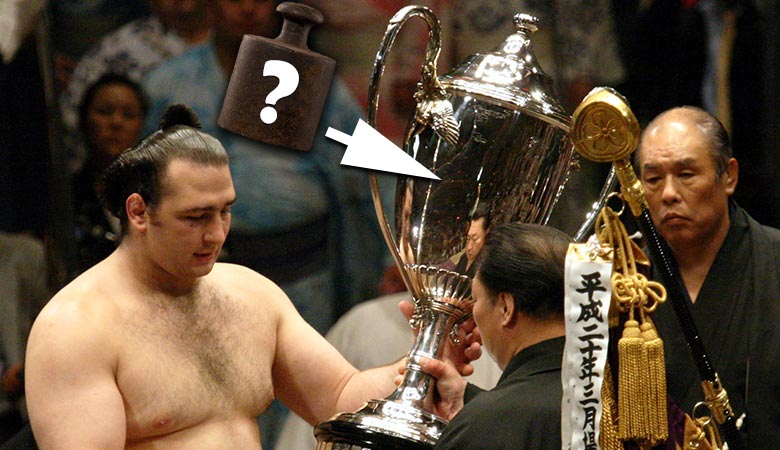 Some of the most iconic moments in sports history involve players, coaches, and team owners triumphantly lifting their hard-earned trophies.  However, some championship trophies would be difficult, if not impossible, to lift due to their tremendous weight.

In some cases, the trophies’ heft is the result of their sheer size, while others are heavy because of the material from which they were crafted.  Whether they are fashioned from brass, silver, or wood, one thing that the ten heaviest sports trophies ever won have in common is the impact they have made not only on the victors who earned them but on their respective sports.

This ornate silver trophy is awarded to the winner of the Omega Dubai Desert Classic golf tournament in Dubai, which is part of the United Arab Emirates.  As one of the premier events on the European Tour, this tournament attracts a world-class field of the best professional golfers from around the globe.

Standing over three and a half feet tall (110 cm), the America’s Cup trophy has, for the past 172 years, been awarded to the victorious team in what is arguably the world’s oldest international sporting contest.  Also known as the Auld Mug, this remarkable piece of silverware has been modified several times to accommodate the growing list of winners’ names etched into its pedestals.

It is perhaps one of the most iconic scenes in all of sports, playing out in the middle of every June – exuberant hockey players taking turns skating around the ice with the Stanley Cup raised triumphantly over their heads.  Standing at nearly three feet high (90 cm), the Stanley Cup may very well be the most famous and recognizable sporting trophy in the world.

The Daytona 500, which takes place at the beginning of the racing season every February, is considered the Super Bowl of NASCAR.  To the victor goes the Harley J. Earl trophy, which measures just under two feet in length and is oval-shaped to mimic the Daytona International Speedway’s track.

The Premier League Championship trophy is awarded to the soccer team that finishes first among 20 clubs after a grueling nine-month long season comprising 38 matches.  The trophy measures nearly three and a half feet (104 cm) tall and weighs in at an impressive 56 pounds.

To the wrestler (rikishi in Japanese) with the best overall record during a tournament that extends for 15 days, goes the Emperor’s Cup trophy.  Standing over three and a half feet tall (108 cm), the massive trophy bears the names of victorious sumo wrestlers.

The winner of the Indianapolis 500, otherwise known as the Indy 500, wins this massive trophy that stands over five feet tall (five feet four inches to be exact).  The Borg-Warner trophy is a fitting prize for the first driver to cross the finish line under the waving checkered flag, for the Indianapolis 500 is widely considered one of the most prestigious motorsports events in the world.

One of the fiercest rivalries in college football is the annual contest between the UCLA Bruins and USC Trojans.  To the victorious team goes not only a year of bragging rights in Los Angeles but also possession of the Victory Bell Trophy.  The Victory Bell is so massive that it takes a team of undergrads to push it around on its carriage.

Standing over seven feet six inches tall, the Chief Caddo trophy that is awarded to the winner of the annual rivalry football game between Northwestern State University and Stephen F. Austin State University is considered by many to be not only the largest trophy awarded in college sports but in all sports worldwide.  They may be right.

While this annual contest may not be a marquee matchup on the national college football landscape, the rivalry game between Nevada and UNLV does feature one of the biggest trophies in the game.  The Fremont Cannon trophy, named after Captain John C. Fremont, is awarded to the game-winner and is considered in many circles to be the heaviest rivalry trophy in all of college football.

In sports, trophies signify the accomplishment of victory and recognition of the personal commitment and sacrifice of the victors.  While on a philosophical level, the particular attributes of a trophy should not matter in the grand scheme of things, trophies with impressive mass can add to the spectacle of any contest small or large and serve as symbolic reminders of what is at stake.