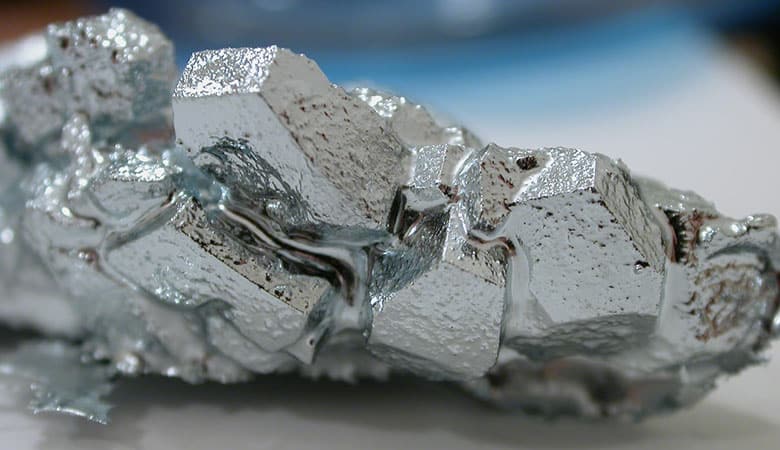 The periodic table has a variety of different elements. Of the 118 elements, 95 are considered metals. I would venture to guess that, chemists aside, most of us might struggle to name more than 10 of them! Each metal has its own values for a range of different properties.

What are the 10 heaviest metals, by density and atomic weight, from lightest to heaviest?

Some of these rankings may surprise you. Such as, is lead really not one of the top 10 densest metals? It’s not. But it is one of the heaviest. Let’s talk about density, atomic weight and how different metals measure up.

When discussing heavy metals, there are two different factors that may seem fairly similar, density, and atomic weight. They’re different measurements and are measured in different units.

The density of a metal affects how different metals interact in different situations. For example, lots of metal types will sink in the water because metal has a higher density than water. And a few metals, such as potassium, will actually float in water because they are less dense than water.

Atomic weight is defined as the average mass of atoms of an element. Units of atomic weight are dimensionless and based on one-twelfth (0.0833) of the weight of a carbon-12 atom in its ground state.

In other words, a carbon-12 atom has a value of 12 atomic mass units. Atomic weight is known more commonly as relative atomic mass to avoid confusion because atomic mass isn’t the same as atomic weight. Weight implies a force that is exerted inside a gravitational field, which is then measured by units of force such as newtons.

Now that we’ve differentiated between these two properties let’s take a look at the 10 metals with the highest measures of each.

Mercury is a metal in liquid form at room temperature, often referred to as quicksilver for its silvery-white appearance.

Mercury is very heavy. It weighs 13.6 times more than water in equal volumes. To put it in perspective: iron, stone, and lead can float on its surface.

This metal is used most popularly in barometers, thermometers, and other scientific instruments; it is very useful in conducting electricity. And mercury vapor is used in:

Americium is not natural; it is a synthetic radioactive chemical element that was first produced by a research team in Chicago during the Manhattan project.

This actinide metal is used in your average household smoke detector, by using a form of the metal called americium dioxide to ionize the radiation.

Uranium also has a silvery-grey appearance and is referred to as an actinide metal. Uranium is used most commonly in the military for high-density penetration weapons.

At high impact speed, these projectiles of depleted uranium and other alloys have such speed, hardness, and density that they can cause massive damage to armored targets. Armor plates on tanks are also hardened with uranium depleted plated

Everybody is familiar with the bright yellow metal, but in its purest form, it will look slightly reddish yellow. Despite its density, it is soft and malleable.

Gold is used in a lot of jewelry because of the softness of its pure form. Many times, it’s alloyed with other metals to change the ductility and hardness. One of most important uses of gold is in electronics; gold creates corrosion-free electrical connectors in electrical devices like computers.

A very rare metal the is mined naturally in the Earth often found with many other elements and chemical compounds rather than isolated.

Tungsten is well known for its robustness, and the high density makes it the perfect metal to use in counterweights, ballast keels for yachts, and tail ballasts in commercial aircraft. Depleted uranium can also fulfill many of these uses, but the optimal element is tungsten.

Plutonium is an actinide metal that has a silvery grey appearance that tarnishes and dulls when it becomes exposed to oxygen.

The isotope plutonium-238 emits a lot of thermal energy and has a low level of gamma rays and neutron rays. This isotope is an alpha emitter. It combines low penetration with high energy  which means it needs little shielding.

Being able to make so much heat, it can generate a lot of electricity as well. The half-life of this isotope is about 87.74 years which makes it a perfect power source for devices that need to function without maintenance for about an average human’s lifespan.

This is a radioactive actinide metal that appears silvery and also tarnishes when it’s exposed to the air. Neptunium can be found accumulating within commercial household ionization chamber smoke detectors from decaying americium.

Neptunium is fissionable and can possibly be used as fuel in a nuclear weapon or fast neutron reactor. However, many believe that neptunium has never been used to make a weapon to this day.

A very dense, ductile, malleable, precious, unreactive transition metals that look silvery-white. Platinum is used in all sorts of processes:

Platinum is very resistant to wear and tear, and very tough all around. All the devices, appliances, and jewelry it’s used in have a spectacular lifespan. Platinum is very rare and expensive, however.

A brittle, hard, transition metal that shared a silvery-white appearance with platinum, iridium is the second densest metal following osmium.

Iridium is used primarily in electronics such as spark plugs and electrodes. Devices that need to withstand against extreme temperatures are usually made of iridium.

Similar to Iridium, osmium is a hard-brittle transition metal that looks bluish-white. This element is the densest, being found in rarely in platinum ores it is a pretty scarce element

Osmium is used very rarely in its pure state because of its toxic and extremely volatile. Osmium is alloyed very often into devices and machines that can need to withstand a lot of wear and tear.

Some other specific tools they are used in are:

Mercury is very heavy, along with its high density. It is used as a primary explosive and used in the cartridges of firearms.

The weight comes into play mostly when mercury is in its liquid state because many things can float on top of it. The Fresnel lenses of lighthouses in the past were put on top of the baths of mercury so that they could float and rotate. This essentially acted like a bearing.

A very heavy metal that is still denser than many other materials. Lead is soft and malleable with a silvery look and slight shades of blue when first cut. Lead turns to a dull gray color once it’s exposed to air.

For many years lead was used as bullets during the middle ages because it was cheap and had a low melting point, allowing faster casting with less equipment. Nowadays, it’s used in ballast keels on sailboats. The density helps it use a small volume while still providing water resistance.

Arguably, the rarest naturally occurring metal in the Earth’s crust this metalloid is surrounded with mystery. One of the main studies that have been ongoing for astatine-211 deals with its capabilities in nuclear medicine. However, this requires fast work because its half-life is only 7.2 hours.

Lead is very popular for construction as well. It’s used as a roofing material in the form of lead sheets to make flashing, cladding, and gutters.

Another radioactive element that is also classified as an alkali metal. Francium is very rare and extremely unstable, which makes it very hard to use commercially. Francium has been used to search for cancer cures, but it was found not to be practical.

Francium can be synthesized, tapped, and cooled very easily, which makes it a great subject to explore spectroscopy experiments.

An alkaline earth metal that looks silvery-white in its pure form but black when exposed to oxygen.

Many uses for radium take advantage of its radioactive properties. In industrial radiography, radium is a crucial radiation source.

Usually considered the first transition metal in the 7th period, actinium is a silvery-white, soft radioactive metal. This metal reacts very fast to moisture and oxygen causing it to form a white coat that prevents more oxidation

Actinium is very rare and expensive with a very high radioactivity level; with these factors in play, it doesn’t have a lot of industrial applications. Research and study are where it is mostly used for alpha therapies and cancer treatment.

Proacting is between thorium and uranium on the periodic table, but it still doesn’t have any industrial or commercial applications. Protactinium is used only for research at this time.

A very silvery metal that appears silver until turning black when exposed to the air. This creates thorium dioxide on the outer layer, which becomes hard and malleable. Thorium’s radioactivity levels are much weaker than other radioactive metals.

Many uses of thorium are related to its dioxide other than the actual metal. This dioxide is special because it has a very high melting point so it can remain solid in flames and increase the flame’s brightness.

Uranium is very similar to plutonium in terms of density, atomic weight, and their uses. Nuclear power plants are fueled by uranium; the fuel used is enriched at about 3% uranium.

Not only is plutonium very dense, but it has a very high atomic weight as well. Like uranium-235 plutonium can be used to propel submarines and aircraft carriers.