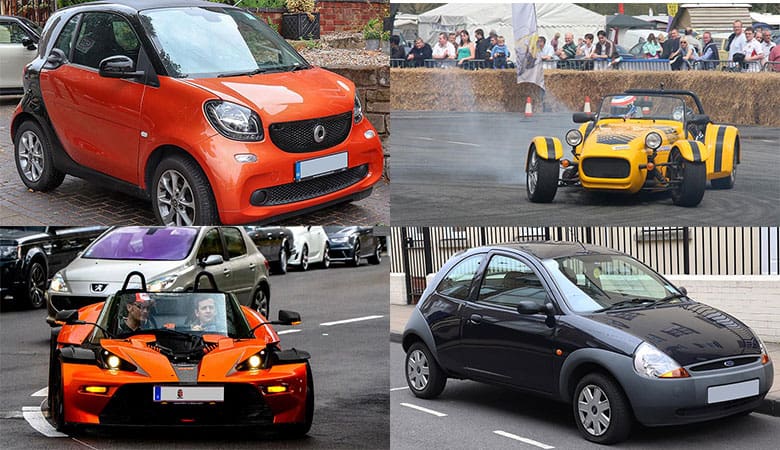 The lightest cars in the world are made for various reasons, like racing and reducing environmental impact. They are popular and sought after, not just by collectors, but also by those who wish to find small, affordable transportation options that aren’t as harmful to the environment and require less upkeep than a larger, more expensive vehicle.

The following list includes the 17 lightest cars in the world, listed from the lowest weight to the highest weight:

Making a lightweight car may seem a bit odd until you think about how many of them are made to race, save money, or reduce their impact on the environment. While many are made and purchased for track racing, several others can be used on public roads. Continue reading to find out more about the 17 lightest cars in the world!

The LCC Rocket was the first car ever made that was powered by a light-weight motorcycle battery. Only 55 of them were ever produced by the Light Car Company, a British manufacturer. It can reach speeds of up to 150 miles per hour and was featured in an episode of Top Gear in 1992.

The R400 has no doors, no windows, and no power steering. It is a very compact car and requires some maneuvering to be able to sit behind the wheel because of its design. It was made to be small, light, and cross the finish line first.

The Seven was made with an aluminum frame to keep it lightweight, which was the ultimate goal of the car’s production. It featured a small interior with two seats that could fit two occupants. With its special design and Ford engine, it can go from zero to sixty in 2.79 seconds.

This three-wheeler is a one-seat vehicle with a V-twin engine. It only has three wheels and the necessary hardware included in its design.

The 1600i is another vehicle from which the windows and doors were left off to achieve a low weight. It uses a 4-cylinder, in-line engine for speed while keeping off the weight. Most often, the 1600i is used for sport, on the racetrack, or shown off and collected.

The original model was released in 1936 and has been kept relatively similar in design in many ways, though the weight and efficiency have changed. The car is created to be light, inexpensive, accessible, and small. All of these are characteristics are desired in the lightweight car world.

The C1 uses an inexpensive engine, cheap materials, and simple design to keep both the weight and the price low. Unlike many lightweight vehicles, this one does include windows and doors, which allows for a much wider variety of uses. With its enclosed design, the C1 allows for driving in most weather, though its low weight will result in less control in wet and icy conditions.

The Smart Fortwo allows for safe travels due to its resilient, stronger frame. However, it is still kept light and inexpensive enough to remain popular. Because of its safety features, the manufacturing of Smart Fortwo models has continued to grow, and its low weight has allowed for more inexpensive pricing.

The Ka isn’t nearly as popular as many light cars due to its cheaper plastic frame that isn’t as safe or resilient as others. Because of these structural issues, they aren’t purchased very often.

The X-Bow was manufactured to be driven for sport on the track and for everyday use on public roads. There is no frame, and the design and features are basic and with no added accessories. It looks like a vehicle you would see on a Nascar track and is light, maneuverable, and compact.

With an aluminum chassis and a lightweight composite body, the Lotus Elise is one of the most popular sports cars today. It has a 1.6-liter engine and 134 horsepower. It can go from zero to sixty in six seconds.

The Mirage offers a backseat and even a bit of space in the rear for storage and transport. The goal of the vehicle is to keep harmful emissions down and to stay inexpensive. Its affordability has made it a top choice for those who want a lightweight vehicle, and the low emissions have made it better for the environment.

As with the 2015 model, the resilient frame is one of the things that keeps the Smart Fortwo vehicle popular among drivers. When ordering your vehicle from the dealer directly, they allow very detailed customization, so you can influence just how heavy your vehicle will be.

The iQ has a hatchback that allows for trunk space and can be used as a daily vehicle, with little inhibiting factors. However, it is still lightweight and compact with a small engine and light materials.

The Spark has a small four-cylinder engine, is made out of lightweight material, and is compact inside. It has four seats and a 1.4-liter engine with 140 horsepower. Its maneuverability allows its low weight to be less of a risk factor when driving in wet or snowy road conditions.

Made with a manual transmission, the MX-5 keeps the electrical weight and other extras out of its design. It is kept inexpensive due to its basic design. It has a 2-liter, four-cylinder engine, and manual transmission to keep it simple-yet-drivable and lightweight. There is an option during manufacturing that adds 50 pounds to the car’s weight by choosing an automatic transmission.

The Miata uses a small engine, producing only 181 horsepower. Its light weight is what enables it to reach the speeds people desire in a sportscar.

The lightest vehicle in the world won’t be the most functional and is probably not going to be used on the street for your daily errands. A majority of the lightest vehicles don’t include windows, doors, or even frames and aren’t safe to be driven. Many were made to race at top speeds as quickly as possible, with minimal gadgets and extra maneuverability.

The shift in driver preference to low environmental impact, affordability, and accessibility for more people has created a demand for more eco-friendly and inexpensive vehicle options. This demand has resulted in lightweight cars that include passenger seats, back seats, trunks, doors, and windows. The most important feature is safety, followed by inexpensive manufacturing and purchasing prices.

Aluminum is one of the most popular materials used and is much more resilient than the plastic, cheap parts used in some vehicles. The type of engine, chosen accessories, and the type of transmission are also heavily impactful on the weight of the vehicle.