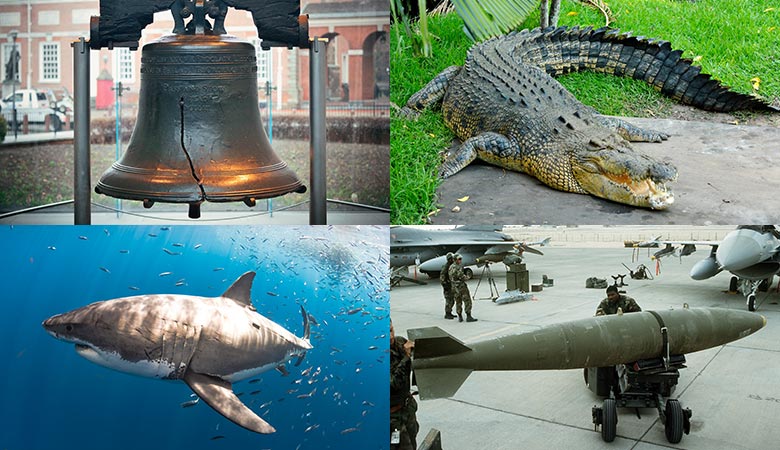 Most people go through their lives without fully understanding the weight of the things around them. Some things weigh so much it is difficult to comprehend how heavy they truly are.

One ton is the equivalent of 2000 pounds or 1000 kg’s. To put this into perspective, the average adult male weighs about 200 pounds or 90 kg’s. It would take ten adult men to equal a ton.

If you have ever wondered about things that weigh one ton, take a look at the following list. These 26 things all weigh one ton, and some may surprise you!

While the massive weight of these things is incredible, it isn’t the only interesting thing about them. Read on to find out more about these 26 things that weigh one ton.

A typical Ocean Sunfish, according to Wikipedia, can weigh up to and a bit over one ton. It is the heaviest of all bony fishes.

The newborn baby humpback whale is over 10 feet long and weighs up to a ton. When they grow up, you can expect them to be the size of a bus and weigh 40 tons.

Walruses are generally social animals who live a long time. According to Wikipedia, they like to hang out on sea ice, looking to snack on mollusks.

The right whale is not the largest animal on earth; that award goes to the blue whale. However, the right whale can say it has the heaviest set of testicles on earth.

There are two African rhino species, and the black rhino is the smaller of the two.  Oddly, the differences between these two rhinos have nothing to do with their color. They are both grey.

Water buffalos were domesticated thousands of years ago. There are still wild Asian water buffalo in existence. It is difficult to tell the difference between wild buffalo, domestic ones, and hybrids.

The 1979 Volkswagen Beetle has a curb weight of one ton. The original Volkswagen Beetle, or Bug, was designed in Germany. Volkswagen stopped making the Bug in the late seventies, but the manufacturer brought it back years later.

Weight matters when pulling campers, so manufacturers are careful to indicate the Unloaded Vehicle Weight (UVW), or dry weight, of their campers. If you need your camper to weigh in at a ton, the Flagstaff Hardside with the T12RB floorplan is a great choice!

The Liberty Bell is a symbol of independence. The bell was cast in 1752 in England and was moved to Pennsylvania. When the bell rang on July 8th, 1776, it was to call the people of Philadelphia for the first reading of the Declaration of Independence.

The Chevette is another vehicle making the list with a curb weight of one ton. The Chevette was designed because of the 1973 oil crisis when Americans were concerned about having enough domestic oil to get by. The Chevette was engineered to be fuel efficient at 40 miles per gallon, which beats some cars built today.

Keeping valuables safe is a big enough of a business that Sturdy Safe has a safe that weighs one ton. The Heavy Metal Package with fire protection might set you back a ton of coin, but it is big and heavy enough to keep all your valuables under lock and key.

A hard drive in 1965 needed a forklift to move. IBM launched this technology, and it was considered a major advancement in storing technology.

Have you ever heard the question: Which weighs more – a ton of feathers or a ton of bricks? If you are quick-witted, you already know that they weigh the same – one ton.

Bullion weighs 27.42 pounds and is considered an investment that performs better than the Dow. Don’t plan on hauling them around to show off, though; they weigh a ton.

At 64 pounds a cubic foot, saltwater is a little heavier than freshwater. For some perspective, 31 cubic feet of water fills a large hot tub.

With the subway track weighing 100 pounds per yard, it takes 20 yards to equal a ton. Tracks for rapid transit are much heavier.

Percheron Draft horses originated from France and were once war horses. These gentle horses vary in weight, but the average Percheron comes in at right around a ton.

These bears might look cuddly, but they are the largest among land animals, and they are ferocious. Unfortunately, these beautiful animals are vulnerable to extinction due to sea ice melting.

This fishing boat weighs in just over a ton and is a stylish way to spend an afternoon fishing!

A moose may come into the world weighing only 30 pounds, but an adult male moose easily weighs a ton. If you have ever come across one standing in the road blocking your car, you already know how large they can get!

Ten feet of a live oak tree that is 22 inches in diameter weighs one ton. Hardwood tends to weigh much more than softwood.

In 2019, a California farmer entered a pumpkin into a contest weighing just over a ton and won the prize. Interestingly, it isn’t the heaviest pumpkin to date. It is the second heaviest.

This general-purpose bomb is a part of the Mark 80 series. It came into service during the Vietnam War, and it can create a crater 50 feet wide and 36 feet deep.

The adult male saltwater crocodile’s average weight can reach a ton. This crocodile is considered the animal most likely to eat a human.

Giraffes are the tallest land animals on earth, and the male giraffe can get as tall as 18 feet and weigh a ton. The females, however, are a bit smaller.

If you are filling a sandbox with sand, it is helpful to know how much it will hold. 22 cubic feet of sand weighs one ton. That is enough to fill a sandbox that is seven feet wide, six feet long, and six inches deep.

The average weight of the great white shark comes in just under a ton, but when you look at fully mature female great white sharks, they often weigh a ton. In October 2019, a 15 foot, one-ton female was spotted on the east coast.

Our sense of wonder drives us to explore to world around us. Humans tend to notice the unique and the unusual. This list of things that weigh one ton is sure to pique your curiosity about the weight of things.