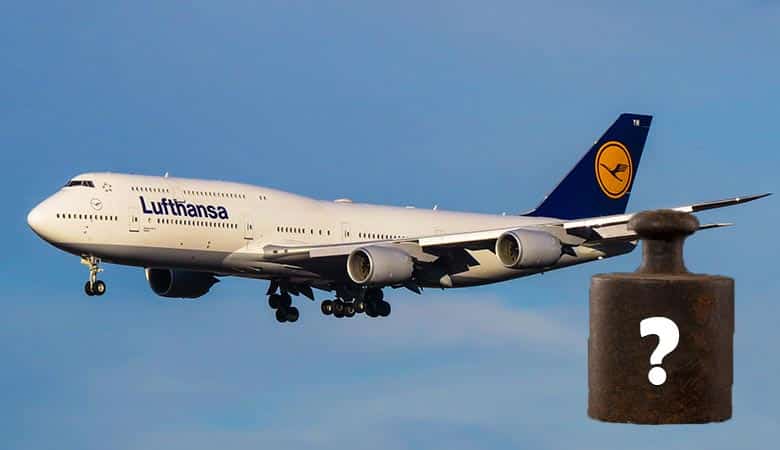 The introduction of the 747 airplane was nothing but glorious in the history of air transport. For the longest time, the US had been searching for a strategic aircraft until Boeing came up with this design.

The plane was launched in 1970 when air travel was picking up pace. Today, the Boeing 747 is the most famous plane in the US. But, the question is, how much does this glorious bird weigh?

On February 9th, 1969, the first Boeing 747 was completed. The plane was dubbed the City of Everette. You see, in the 1960s, there was a growing demand for air travel, and the capacity on the aircraft back then was still less than 100 people. Because the demand was on the rise, plane manufacturers were tasked with coming up with a bird that would fit more people and be economical.

The then-president of Boeing, William Allen, admitted that the company risked much of it’s worth developing the largest passenger aircraft in the world seating 374 passengers and up to 550 in some configurations. At the time, the plane weighed more than 300 tons, which is equivalent to ten fully-loaded trucks (18-wheel). The tanks had enough fuel to power a small car around the globe at least 36 times.

On that fateful day, February 9th 1969, the 747 took its first flight around Western Washington. The bird was to later serve as a testbed for the 747-system upgrade and improvements and new engine development by the company. This includes the state-of-the-art Boeing 777 engine.

How do planes fly?

If the 747 is so heavy, how does it manage to fly? If you think about it, everything on the face of the earth has some weight. This is a product of gravity and mass. A small 747-8 passenger plane has a maximum weight of around 487.5 tons, representing the force with which the aircraft is drawn towards the earth.

But there is another force known as Lift, which holds the airplane in the air. This force is accomplished through the wings, also known as an airfoil.

This is the first spin of the Boeing 747. It was built with Japanese customers in mind and could sit up to 500 passengers in a single class.

Because the Boeing 747 could be changed, Iran Air and Pan Am jointly requested that the company build a plane that could travel long range. The two airlines wanted to connect New York City and Tehran.

Boeing reduced the payload capacity, which shortened the aircraft. They also made significant changes to the wings. The plane could fly 276 passengers over 5,800 nautical miles. Its take-off weight is 272,100kgs or 599,877 pounds.

With the company’s success, they sought to build a plane that would fly for longer and accommodate more people and weight capacity, thus the 747-200.

The 747-200C was build to switch between two transport modes by having removable seats and a forward nose-opening cargo door while the 747-200M carried both passengers and cargo. Its weight comes in at 358,000 pounds or 179 pounds.

Every family has a black sheep, and in the Boeing family, the forgotten child is the 747-300 version. It only flew for two years before it was replaced by the 747-400.

However, it was the first plane to remove the spiral staircase and replace it with straight stairs to the upper deck. This allowed for more seating capacity upstairs. The aircraft was retired in 2015. It weighs 392,600 pounds or 196.3 tons.

This aircraft came with many changes for the airlines. First, the cockpit crew reduced from three to two, and it could also carry more passengers and freight. This craft also marked the end of refueling airports.

Like other generations, the 747-400 has different variations, such as 400 for passengers, 400F for freight, 400M the combi version, and 400D the domestic version made specifically for the Japanese market. They also have the 400ER or extended range passenger, and the 400 ERF extended range freight. The passenger plane weighs 404,600 pounds or 202.3 tons.

This airplane marked the last version of the 747-8 and was developed in 2005. It was longer than the other 747 generations and allowed for 16% more payload. It’ variations include 747-8I for international passenger and the 747-8F the freight version. The passenger plane weighs around 975,000 pounds or 487.5 tons.

However, the 747 Boeings were retired in the US, ending a 50-year reign in the sky. During this period, the 747 had come to be known as the queen of the air, Dreamliner, and jumbo jets. Today, both Delta and United Airlines have said goodbye to the 747.