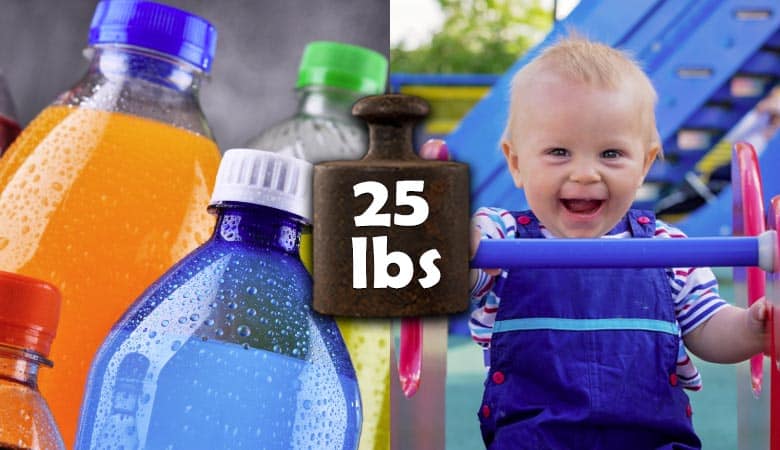 Twenty-five pounds translates to 11.3 kilograms, which, when you lift, is pretty heavy. While you may not walk around with this weight on your shoulder, you can still carry items weighing 25 pounds with ease from one position to another.

For instance, from the store to your house or driveway to the house. That said, which household items do you have that weigh around 25 pounds? Let’s find out.

Without a doubt, water is an essential commodity for everyone. You need it to keep your body hydrated, absorb and assimilate minerals, amino acids, and vitamins into the body and flush toxins and waste out. In fact, over 70% of your body is made up of water.

Each gallon of water you purchase from your local store weighs approximately 8.34 pounds, which means three of these will give you 25 pounds.

That’s the weight at room temperature. When ice, the weight is around 8 pounds, which is still close to 25 pounds when you have three gallons of frozen water.

Americans used soap flakes to wash their clothes before laundry detergent was invented. In the 1930s, the first laundry detergent named Dreft, developed by Procter and Gamble hit the market, and things have never been the same.

Today, a detergent bottle weighs around 5 pounds and is found in every home and other places that need regular laundry done, such as your local laundromat and hotels. With five of these bottles, you will have 25 pounds on your back, which is a pretty decent weight.

So, next time you buy a couple of laundry detergent bottles, you’ll know exactly how much weight you have in your shopping cart.

The EZ curl bar varies a little bit in weight, but they fit in the range. The EZ curl bar in most gyms weighs around 15.22 to 25 pounds, respectively.

A typical EZ curl bar is usually 47 inches in width, although it might be longer to about 52 inches.

It’s always good to know the weight of the equipment you regularly use to help in tracking your progress and consistency. It also helps if you change gyms or travel for some time, as knowing the weights makes you stay consistent if you are new.

Who doesn’t love having kids around them? Ever wondered how much a two-year-old should weigh?

People who love working out while at home and enjoy playing with kids can use them as weights when exercising. Two-year-old kids come in handy when you need to squat, do push ups, or lunges.

When someone mentions the term beer, what comes to your mind? It’s either party time or taking one for the road, and not how much the beer weighs.

Well, that regular beer you love weighs around 16 to 18 ounces, so you’ll need approximately 30 to drink 25 pounds worth of beer.

This sweet soft drink is readily available and comes in handy when you want to quench your thirst.

When it comes to weight, five two-liter bottles weigh about 25 pounds. The market for soft drinks first emerged in the 17th century, where the sodas were a mixture of water, honey, and lemon juice.

Football is one of the most-watched and played sports of all time. About 90 percent of the world population know about this sport, but surprisingly, nobody bothers to know how much a football weighs.

A football weighs a pound, so you’ll need twenty-five footballs to make 25 pounds.

It’s easy to access car tires around, and you can use them at home to exercise. You can opt to use a new or used tire, but the weight will vary. This strategy is best used by someone who is obesely overweight as a starting point. Obviously, you will need to advance to heavier tires as you build strength and become stronger.

According to history, sugar was first used by man in Polynesia from where it quickly spread to India. Some historians argue that it was discovered by western Europeans around the 11th century AD, but it was first recorded in England around 1069. Back then, it was treated as a commodity only the rich would afford, but today it’s found in every home.

A one kg sack of sugar weight around 2.2 pounds, so you’ll need around 11 of these to make 25 pounds.

Most of these items are available in our houses and workplaces, making it easier to use them for measuring or workout tools. In contrast, some of these items come close to this or exceed it by just a small margin. So, the above items are only an exact or slightly off by a pound.