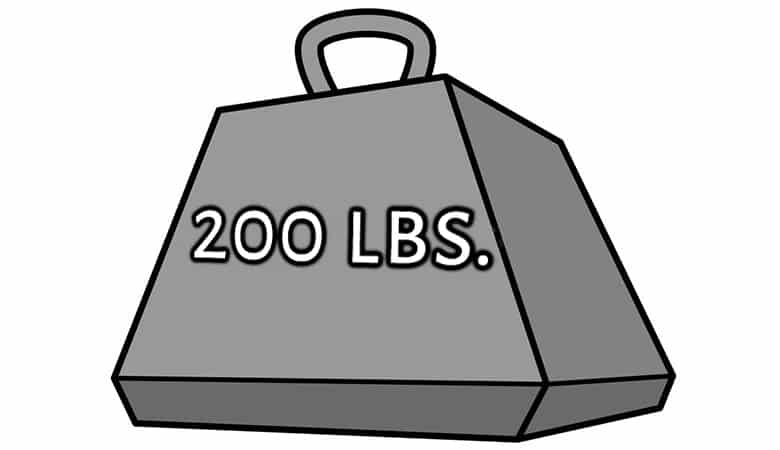 The average weight for an adult human worldwide is 137 pounds, but for an American male, the average is 195 pounds, which rounds up to 200. However, humans aren’t the only ones who can weigh 200 pounds.

What are some common things that weigh 200 pounds? Large dogs, like the Great Dane and the Mastiff, can reach 200 pounds by adulthood. Some adult humans also weigh 200 pounds. Refrigerators and washing machines also weigh about that much, although exact weight varies by the make and model.

It can be hard to picture 200 pounds as that can seem huge, but it’s more common than you might think. While you probably won’t need to compare the weight of 200 pounds, it can be useful to know what weighs so much. That way, you can determine if you’re able to move something or if you need to hire help.

Many people have pet dogs, either as children or as adults. Of course, dogs come in many sizes, and some breeds can weigh around 200 pounds. While breeds like the Chihuahua hardly surpass 10 pounds, it’s not uncommon for other breeds to outweigh humans.

A male Great Dane can easily reach 200 pounds as an adult, though females tend to weigh less than that. Mastiffs and Neapolitan Mastiffs can also reach 200 pounds, though this time, both males and females can make the cut.

While plenty of other breeds top 100 pounds, many of them don’t come close to 200. If you’re a fan of the biggest dogs out there, you will probably own a 200-pound dog at some point in your life. You can learn more about some of the largest dog breeds here.

First large dogs, now huge home appliances.  Yes, the refrigerator is another common thing that weighs 200 pounds. If you’ve ever tried to move a refrigerator, you know that it can be difficult to move. Its massive size doesn’t help either.  Maybe the dolly was invented for just this purpose.

Now, you probably don’t have to move your refrigerator often, if at all. Still, it can be useful to know how heavy it is in case you do need to move it. That way, you can ask your friends to help or hire a professional mover.

Of course, emptying your fridge won’t do much for the weight, but it will reduce any extra pounds. Your food stash probably won’t weigh nearly as much as the fridge itself, though, so make sure you’re careful whether the fridge is empty or full. If you want to know how your refrigerator compares to other heavy appliances, click here.

Another heavy yet common appliance is the washing machine. Like the refrigerator, an average washing machine weighs about 200 pounds. It’s another item that you, hopefully, won’t have to move much.

The weight of the washing machine means that it won’t tip over during a washing cycle. That can keep your clothes where they need to be for a good clean, and it can help protect your surrounding floor. As long as you put the washing machine by the hookups in your home, you’ll be good to go.

You can wash your clothes without worrying about the washing machine moving around. That can help you design the layout of your laundry room. However, it’s good to know so that you can hire help whenever you do need to move it.

Your washing machine wouldn’t be complete without a dryer to match. While your washer and dryer don’t have to be identical, they will probably weigh the same. The exact weight of a dryer can vary, though, and some can weigh much less than 200 pounds.

Dryers with a capacity of 9.0 cubic feet or more are the ones that weigh as much as your washing machine. These dryers are great for families or anyone who needs to dry larger loads of laundry. The weight can help your dryer stay upright, especially when it’s working harder to dry your clothes.

Like your washing machine, you shouldn’t ever have to move such a heavy dryer once it’s installed. As long as you can get your stuff in and out of it, you’ll be good to go. And if you think that’s too heavy for a dryer, then you can choose a smaller and lighter one.

Moving out of the laundry room and into the guest room, you can find a small futon that weighs about 200 pounds. That’s right, futons can be almost as heavy as couches, so think carefully before moving one on your own. Whether you sleep on a futon or keep one for guests, you should know how heavy yours is.

As with other everyday items, not all futons weigh exactly 200 pounds. Some weigh much more while others weigh much less. It all depends on the dimensions of your futon and the materials used.  Wooden futons are naturally heavier than metal ones. However, in any case, you should know they’re not the lightest piece of furniture.

When moving a small futon, you will almost definitely need some help. The fabric may make it easier to move than a refrigerator, but it weighs just the same. Because of that, you still need to be careful when moving a futon.

Heading into the bedroom, you may have a wardrobe instead of a dresser or closet. A larger wardrobe can easily weigh 200 pounds. After all, it needs to support and store all of your clothes.

While smaller wardrobes are lighter and easier to move, they won’t hold as many items. They also may not hold full-length dresses or coats. If you get a wardrobe to store your clothes, make sure you choose the right place to put it so that you don’t have to move it.

Of course, not everyone needs a wardrobe. If you have enough closet space, you can use that for your clothing, and you won’t need a 200-pound wardrobe. However, it’s not a rare item, so it’s worth knowing how much it weighs.

If you or someone in your family is a musician, you may have a piano in your home. Surprisingly, some traditional pianos weigh much more than 200 pounds. However, the spinet piano hits that mark just about perfectly.

A spinet piano looks like an upright piano, but it’s shorter. You can still sit at it like you would any other piano, but the top of the back of the spinet isn’t as high. A spinet is a good choice if you don’t have much wall space for a piano.

While some electronic keyboards weigh a few pounds, grand pianos can weigh over 1,000 pounds. Compared to some, the spinet piano doesn’t seem so heavy. Still, pianos aren’t something to move willy-nilly.

A China cabinet, sometimes called a Breakfront, is another common item that weighs 200 pounds. Of course, you can store and display your China in one of them, but it has plenty of space for storing other things. After all, it weighs 200 pounds, so it should have enough space for more than a few items.

Whether you use it to display China or as storage for other household items, you should avoid moving it. That way, you won’t have to strain yourself as you lift its weight. If you ever do need to move it, you can hire professional movers to help you out.

It may seem like 200 pounds isn’t that much, or you might not be able to picture anything that heavy. In either case, plenty of everyday items tip the scale right at or near 200 pounds. Knowing what those items are can help you should you ever need to move any of those things.