The Elk or wapiti, as commonly known, is the second-largest species of the deer family, Cervidae.

The male species are identified with their antlers which they shed during spring when testosterone reduces in their body.

There are more than six elk species, with only four living in North America. Roosevelt’s Elk, Rocky Mountain Elk, Tule Elk, and Manitoban Elk. The Merriam and Eastern Elk are extinct due to over-hunting.

There are many things to learn about elks, including their weight, subspecies, lifecycle, and gender differences. Read on to find out more about these animals.

How Much Does an Elk Weigh?

Elks have slender legs and short legs with thick and heavy bodies. They can grow to around 2.6-4.1 feet tall with a nose-to-tail length of 8 ft. 10 in.

Read on to learn more about the differnet elk species and their weights.

Factors Determining The Weight of an Elk

Many factors influence the weight of an elk. Climate, environment, and food source are the biggest factors. Elk could be from the same subspecies, but living in separate habitats may exhibit a weight difference. Here are some other factors that affect the weights.

Younger elk are smaller than adult elk. At birth, calves weigh around 33 to 35 pounds. The growth rate and diet will also contribute to their weight gain as they become older.

Only bulls have antlers, and they lose them yearly in spring. The antlers alone add around 40 pounds of weight to the overall size.

According to biologists, there are around six elk subspecies. These species have been studied for a long time and are predominantly found in North America.

The largest American elk herd lives in Colorado and has over 300,000 animals. Here are some elk subspecies you can find in the US and Canada.

They mostly live in Washington and Oregon, but some can be found in British Columbia and northern California.

This species appears darker than the American elk, and they are some of the toughest elk to hunt. They inhabit rugged and wet rainforests in Oregon, making them hard to catch. 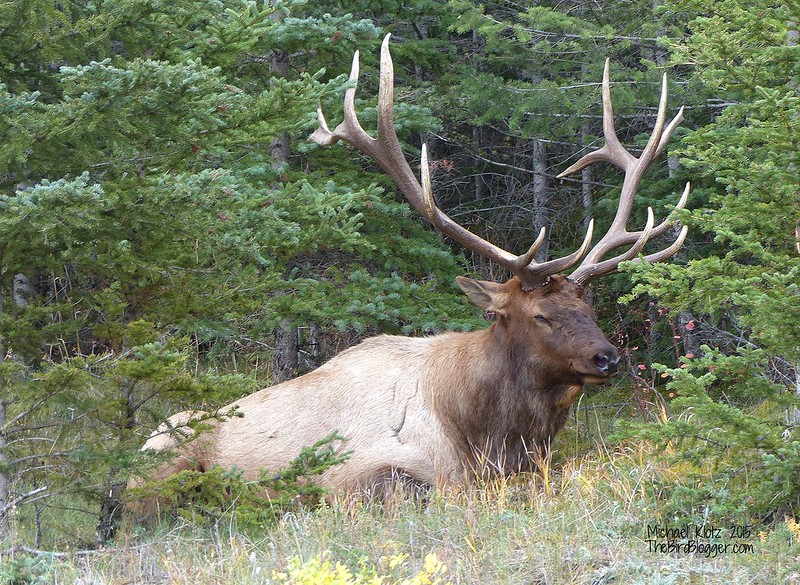 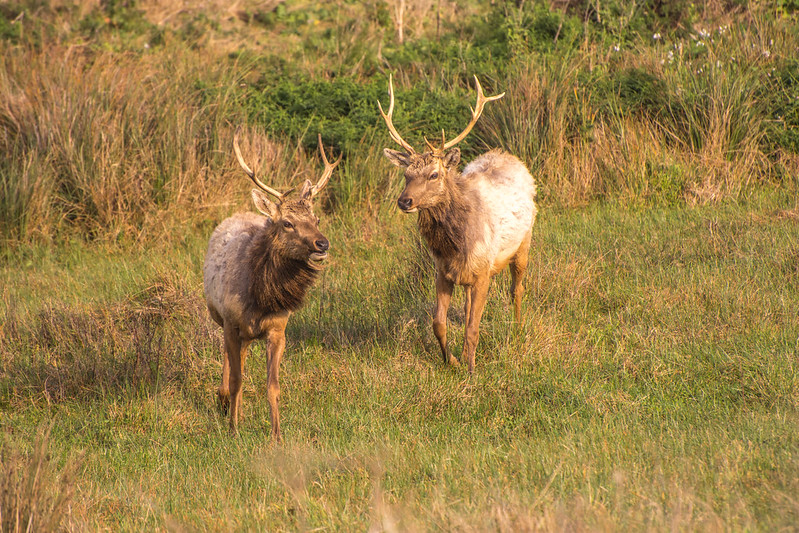 This species lives in a moderate Mediterranean climate and similar vegetation.

The Manitoban Elk (Cervus canadensis manitobensis) primarily lives in Manitoba and areas of Saskatchewan. However, some species crossed over to the Great Lakes States.

The Manitoban Elk is bigger than the American Elk, only that it has smaller antlers. This subspecies population has recovered despite being driven to near extinction.

The Merriam Elk is scientifically called the Cervus canadensis merriami and is an elk subspecies that live in the Southwest United States. The species is popularly found in Arizona and New Mexico.

Elk are a very social deer species, and during summer, they can move in groups of 400. Adult males and females usually move in a herd, with female herds being larger than the bulls.

Bulls sometimes travel alone, and young bulls may associate with female groups or older bulls. Male and female herds only come together during mating season, usually in late August.

The estrus cycle of female elk lasts for only a day or two, and mating happens in a dozen or more attempts. In autumn of the second year, females only give birth to one and, on rare occasions, two offspring.

Reproduction mostly happens when the cows weigh roughly 440 pounds (200 kg). Dominant bulls follow cows from august to early winter and can defend around 20 or more cows from competing bulls and predators.

Bulls also dig hollows into the ground where they urinate to roll their bodies. They spray their urine to soak into their hair to give a distinct smell that attracts females. A bull can only interact with a female through courtship and herding. When a female moves away from the harem, a bull elk blocks her path and returned her to the harem.

The bull is very calm during courtship and approaches the female with the head and antlers raised. This signals mating intention to the female for sexual receptivity. Younger bulls are sometimes less dominant and sometimes harass unguarded cows. The spike bulls pursue female elk even when they are signaled to stop. They are less productive, and the cows may move closer to the big bulls to avoid harassment.

The gestation period for elks is around 240 to 260 days, and they give birth to offspring weighing 33-35 pounds (15-16 kg). When the females are almost giving birth, they isolate themselves from the herd and stay isolated until the calf is grown enough to escape predators.

Like all deer species, elk calves are born spotted but lose spots when summer ends. Two weeks after birth, calves can join the herd and be fully weaned at two months.

Elk calves are huge and are the same size as adult white-tailed deer at six months. Elk leave their birth ranges before reaching three years old. However, males tend to move further than females. Elk can live for 20 years in captivity but only up to 13 years in the wild. Some subspecies that are less hunted can live to around 15 years.

Elks mostly move in herds of up to 400 animals, making it hard for scientists and hunters to tell the gender at the moment. However, those with keen eyes use the physical differences to tell the differences. Take a look at ways to distinguish between male and female elk.

Like most wild animals, male elk (bulls) are physically bigger than female elk (cows). Bulls can grow up to 4.5 feet tall while cows reach only 3 feet.

Hunters mostly prefer picking male elk because they are bigger and have more meat. Their meat is also low fat which explains why there are many Elk hunting seasons in America.

Telling the difference between a bull and a cow is very easy. Apart from having different sizes, bulls also have antlers that can grow over 2 feet.

Males usually mark their territories by digging hollows in the ground. They then urinate in the holes and roll in the urine. In addition, they also urinate, pointing their urethra towards their body.

This urine gets soaked up into their fur, making them stink and announce their readiness to mate with the cows. Hunters and scientists can therefore trail the smell of urine to identify male elks. Female elk are often pursued, so they do not have to go overboard with marking territories.

Bulls are also loud and high-pitched and produce a whistle-like sound called bugling. They do this to advertise their fitness over long distances. These buglings are very unusual and can reach up to 4000 Hz.

On the other hand, females produce an alarm bark to alert the herd of any danger. Males produce these sounds by blowing air through the nasal cavities from the glottis. Listening to these two distinctive sounds makes it easy to differentiate between bulls and cows.

Calves produce a high-pitched scream to get help when they are being attacked.

Even though bulls can weigh over 100 pounds, they can run faster, reaching over 40 miles per hour. These animals can outrun even horses in short races.

They can also jump over eight feet, making them hard to catch. Cows are also fast but do not run faster than bulls. Bulls are supposed to protect the cows, and when one leaves the herd, they chase them to get ahead and block them from leaving the herd.