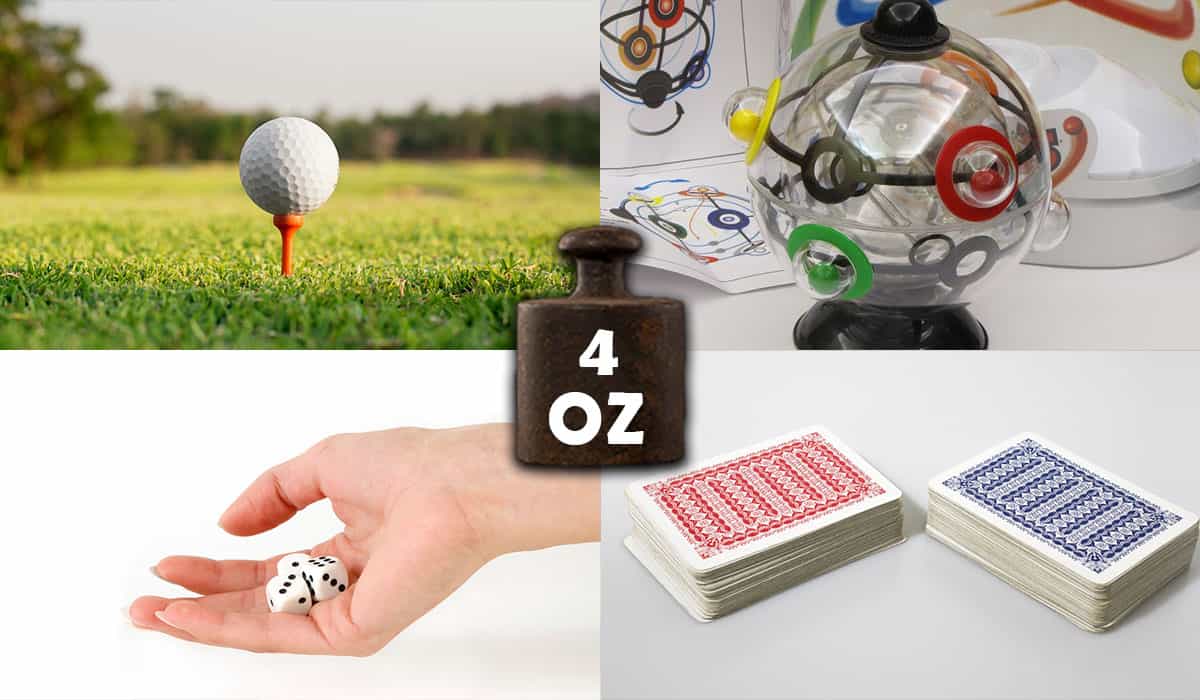 Nearing the holiday season reminds us of what made the season special to us when we were young – toys and games. Thinking about 4 ounce items that connect us to some playful activities is not that hard to do. Imagine a life without 4 ounces in it, and it may be a pretty boring one. Here’s a list of 11 items that connect with fun things we enjoy doing:

In the U.S., standard playing cards are available in both “wide” (poker) and “narrow” (bridge) sizes. In most U.S. casino poker games, plastic bridge sized cards are used.

In other table games, such as 21, also known as blackjack, a modern casino may use hundreds or even thousands of decks per day, so paper cards are used for economic reasons. A deck of cards weighs about 3.4 ounces.

With a slightly different look than its predecessor, the Rubik’s 360 was released in 2009 by Erno Rubik, the inventor of the Rubik’s Cube. To complete the game, players must maneuver the balls from the inner sphere to matching slots on the outer sphere.

There are endless ways to twist and turn this sphere, but only one solution to solving the puzzle. A Rubik’s 360 weighs about 4.8 ounces.

The size “D” battery is the oldest of the modern battery sizes, first invented by the National Carbon Company in 1898. In addition to needing batteries for specific games in order to play them, “D” batteries also come in handy for flashlights and portable pumps. A size “D” battery weighs about 4.7 ounces.

Size “C” batteries are typically used in medium-drain applications such as toys, flashlights, and musical instruments. A “C” battery weighs about 2.3 ounces; it would take two of them to weigh about 4 ounces.

Per Major League Baseball’s (MLB) Rule 4.01(c), special mud (from New Jersey) is used to rub baseballs before each game to reduce their luster and make them easier to grip. The MLB guidelines also specify a baseball must weigh between 5 and 5.2 ounces, just a little over 4 ounces.

Per the International Tennis Federation, a number of factors should be considered in order for the playing ball to meet the standard. This includes the deformation, weight, size and bounce.

To test the bounce, drop the ball (on concrete) at the height of 100 inches or 254 cm, to meet the standard it must bounce back to a height of 135 cm to 147 cm. Likewise, according to the standard, an official playing ball must weight about 2.04 ounces. Two tennis balls would weigh around 4 ounces.

The U.S. Golf Association requires that a golf ball should weigh no more than 1.62 ounces. There are 3 types of golf balls (1) Two-Piece golf balls are designed for distance, lower spin and durability, and are good for beginners.

These balls are also most affordable. (2) Multi-Layer golf balls are more expensive and are less durable. They’re good for golfers who want a softer feel and more control around the greens. (3) High Performance golf balls are the most expensive on the market and the least durable. This is the ball of choice for professionals. It would take 2 to 3 golf balls to weigh 4 ounces.

Light is a good thing to have in any game room. Without it at night it would be extremely hard to compete. A standard, 60-watt light bulb weighs about 1.2 ounces. It would take 3 to 4 light bulbs to weigh 4 ounces.

It may have been a while since you’ve had use for a compact disc (CD), but CDs have been around for years, and have been great for entertaining through music and playing games. A CD typically weighs .530 ounces. Eight of them would weigh about 4 ounces.

Any good board game will come with a die. A die of the size most commonly used in board games and casinos, typically weigh .140 ounces. Monopoly, Yahtzee, Risk, and Crap are just a few games that use dice. About 30 dice would weigh around 4 ounces.

Go to any game room, and you may need to deposit multiple quarters in order to play. The America the Beautiful quarters series, which began circulation in 2010, weigh .20 ounces each.

The quarters program is the sequel to the 50 States Quarters program, and consists of 56 new quarters that honor one national park or historic monument in each of the 50 states, Washington, DC, and the 5 U.S. territories (Puerto Rico, Virgin Islands, Guam, American Samoa, Northern Mariana Islands).