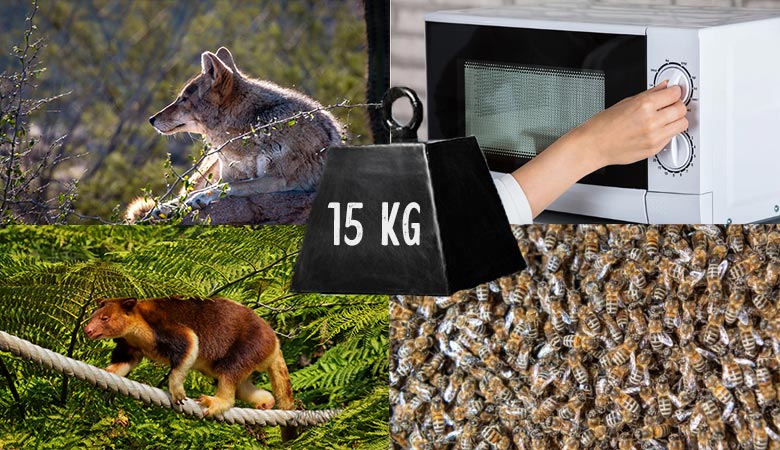 Things that weigh 15kg can come in all sorts of shapes and sizes. Varying in context, items that share this weight can be quite surprising. Whether a singular object or a collection of many, an examination was warranted to compare these exceedingly different examples of what can weigh 15kg.

What are the types of examples of things that combine to make 15kg? These can vary from individual animals living in the wild to groups of kitchen pieces assembled together.

Next time you want to grasp a clear idea of 15kg as a weight, use these comparative examples as a means to do so. While not all strictly 15kg, they can help give a better understanding of the weight.

From wild animals to household appliances to dietary information, we will get started on a list of 7 things that weigh 15kg. While we will go into more detail, here is a list of the 7 examples of things that share this weight:

Coyote’s are most widely known in Native American culture for being savvy and clever creatures. With an average lifespan of up to 14 years, these industrious beasts usually range from 81 to 93 cm in height from head to body, with another 16 inches for their tail.

Like humans coyote’s are mammals and survive on an omnivore diet. Also like humans they can range in sizes. Bigger coyotes can typically weigh 22kg while smaller variations can weigh 9kg. However, on average coyotes typically weigh at roughly 15kg.

Coyote’s are a member of the wider canine family and have adapted to a range of environments including deserts, forests, and mountains. They are generally as big and heavy as medium-size dogs while smaller than wolves. So next time you see an average size dog, remember that it is not too dissimilar to the weight of a coyote.

This species of marsupial is an indigenious creature to the foothill forests of western New Guinea and some of its offshore islands. The grizzled tree-kangaroo can grow to a height range between 75 to 90 cm.

They bear a similar resemblance to the terrestrial kangaroo with smaller types weighing at 8kg while bigger versions catering to a weight of 15kg. Unlike their close relatives found throughout Australia, the grizzled tree-kangaroo mainly resides high in the forest canopy.

Their physiology and weight enables them to maneuver effectively amongst the branches to feed. However, their comparative small size to their larger red kangaroo cousins should not leave them underestimated. The grizzled tree-kangaroo grows to be the biggest and heaviest of all species of tree-kangaroo.

Sticking with animals, the next creature to weigh roughly 15kg is a wolverine. No not the famous mutant from the Marvel universe, rather the solitary mammal. In terms of their size, a wolverine grows roughly to a range of 66 to 86 cm with their average life expectancy stretching from 7 to 12 years.

Wolverines are powerful creatures that are often mistaken for a small bear, but are in fact the biggest member of the weasel family. They weigh on average just slightly above 15 kg. They have stocky bodies and wear thick, water resistant, dark fur.

Despite being the biggest and heaviest of the weasel family, wolverines are often prey to bigger carnivores such as bears and wolves who weigh considerably more.

As the world continues to become more technologically enhanced, the devices we use on a day-to-day basis are increasingly becoming smaller in size and greater in capacity. This is none more evident than when looking at a modern mid-sized microwave.

In comparison to modern day devices, the first microwave was an ancestor of colossus proportions. Standing at 6 feet and weighing 340kg, the original microwave would have cost you $5000.

However today’s microwaves are much smaller, lighter (weighing at roughly 15kg), and cheaper and are a quick and efficient way to warm up a leftover meal or heat food from scratch.

Moving onto food, chances are you are or know someone who is a cheese lover. People love cheese in all the various shapes, sizes, and variations it comes in whether it be cheddar, gouda, melted cheese, or cheese strings.

According to a Bloomberg

report, American’s can’t get enough cheese and have one of the highest consumption rates in the world. It is reported that the average American typically consumes up to 15kg of the various versions of cheese over the course of a year.

So the next time you are looking at a block of cheese, picture how much of those blocks you would need to weigh the same as a coyote, and then imagine eating them.

Staying in the kitchen, if you ever wondered as a thought experiment how much of one of your favourite foods it would take to reach 15kg, the answer for sushi is 750.

While gathering 750 sushis to weigh may not be possible or responsible, it is an interesting illustration to portray exactly how many of any one thing it would take to weigh 15kg.

If the previous example of the average intake of cheese for an American over one year was difficult to comprehend, think of eating 750 sushis over the same period as a comparison.

Similar to individual pieces of sushi, bees can also be used to measure 15kg. If you are a beekeeper or know of a beekeeper then the average weight of the bee can be found and multiplied in order to calculate the exact amount for 15kg.

To put into context, the average beehive consists of approximately 60,000 bees. In order to reach the weight of 15kg with 192,308 bees you would require slightly over three different beehives.

However, gathering the beehives to measure is not suggested as bees do not take too well to being disturbed, particularly when there is honey involved.