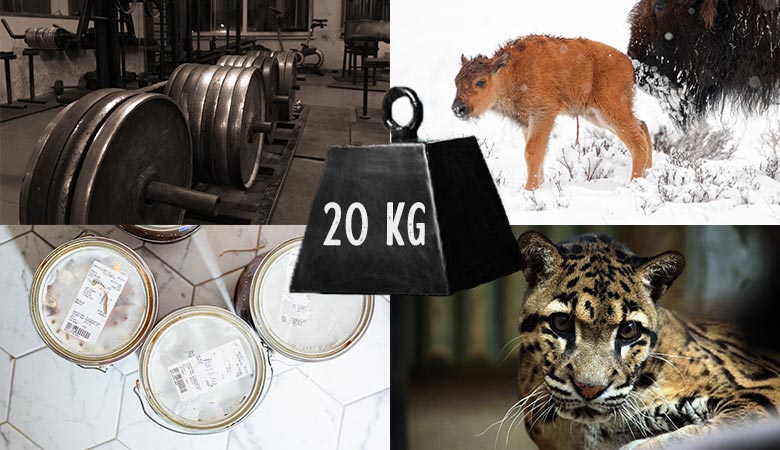 It can be good fun finding out how much various items weigh, don’t you think?

Although some people researching this topic have more practical motivation such as being able to make their recent weight loss achievement feel more tangible.

Being able to appreciate more about the significance of how much various items weigh helps us to put some aspects of daily life more into perspective.

The following list of 8 things that weigh around 20 kilograms has been compiled not only for readers who are just looking for some entertainment but also people who want to have a better grasp on all kinds of stuff in our world.

There are stacks of things that weigh around 20 kilograms, or at least when they are grouped together, in some cases.

Of course, animals and other living things are difficult to gauge in terms of weight as this aspect of their body will alter over the years.

DIY enthusiasts don’t need reminding of just how much room tins of paint can take up.

But as working out the volume of materials needed is part of the process of any redecorating project, home improvers should be able to make provision for all their gear.

Making sure the paint and other essential stuff for your job does not weigh too much for your van or pickup is very important.

And as we know that a gallon of paint is equal to 5 kilograms, we can rest assured that 4 tins of the stuff is going to add up to 20 kilograms.

Being able to finally put something into perspective by learning the weight of certain items can be a huge relief to some.

In fact, some readers here are probably on a quest to at last keep a boastful friend quiet by acquiring such knowledge on this heavy food item.

As a regular bag of sugar weighs 2kg, ten bags of this energy-boosting kitchen item is going to weigh in at a hefty 20 kilograms.

Sweet-toothed shoppers trying to cut down on the weight they carry may choose to lighten their load by purchasing less sugar.

OK, you might think that this one is a bit of a cheat, however; the weight of this common weightlifting equipment is unmistakable – a grand total of 20 kilograms.

Again, it’s getting to know which items we see either on a regular basis or just on occasions weigh 20kg so we can apply this knowledge to other things that matter to us.

We know that just one of these plates is quite heavy, but if we can somehow relate an aspect of our life to the weight of these cumbersome disks, we may feel more content.

With our math hat well and truly on, we’ve worked out that 20 liters (1kg bottles) of the stuff we need to keep living comes to 20 kilograms.

This is quite useful for folk who love nothing more than adventuring in the great outdoors – intrepid campers being more aware of just how much weight they will have in the back of their vehicle before heading out.

Of course, how much water we carry – no matter how much it all weighs, when going on a challenging trek or camping trip can be the difference between success and a very precarious time.

A species once in real danger of becoming extinct, this essential resource for the native Americans of bygone years is not as fierce looking when born as it is when fully grown.

At an average weight of 20 kilograms, the calves of the American bison aren’t as heavy as their European bison cousins although generally being equal in size.

A fully-grown American bison can weigh anything from 422 to around1000 kilograms.

And if we consider that this bulky beast lives on a diet of vegetation, it’s a wonder how they grow from around 20kg infants into colossal adults.

And while we’re on the topic of mammoth mammals as we look for things that weigh around 20 kilograms.

Generally speaking and depending on which part of the world we are talking about, the weight of an adult elephant’s heart is approximately 20 kilograms.

With all three species taken into consideration, the African bush elephant, African forest elephant, and Asian elephant and just how huge they are, there’s no real surprise that an adult elephant’s heart weighs, on average, 20kg.

The unusually-shaped heart of these largest land-living animals on the planet, which can weigh anything from 12 to 21 kilograms are impressive enough just on their own.

Found in regions of south eastern Asia including parts of Malaysia, the clouded leopard cub will grow into a fairly large adult at between 20 and 30 kilograms.

If you can find one of these extremely secretive cats, you might be surprised at just how agile they are – these carnivores make climbing trees look dead simple.

And as they are an endangered species, the clouded leopard, which feasts on deer, monkeys, and birds amongst other prey may not be around for animal lovers of the  future to admire and learn from.

Mostly inhabiting the rainforests and deserts of both the southwestern parts of North America and all over South America, the collared peccary can develop into a tough-looking 20kg animal.

And if we think of how these tusked animals sometimes referred to as “musk hogs” (due to their smell) start life at around 0.7kg, it’s amazing to see how big they can be as adults.