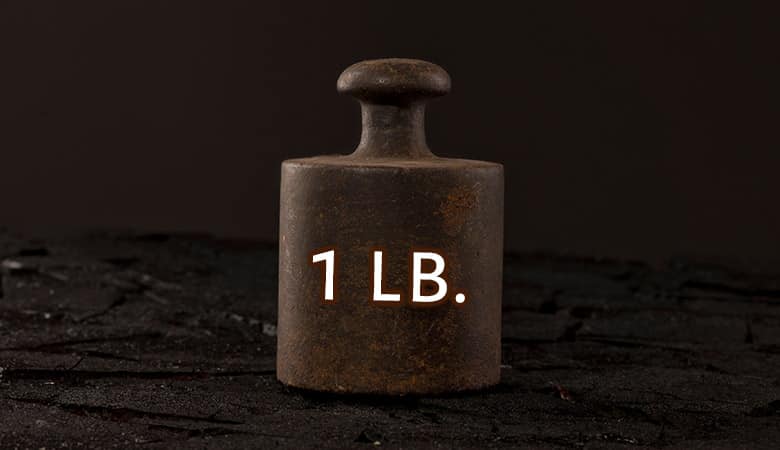 A pound is a unit of measurement used to measure weight that is defined as 0.453597237 kilograms. The pound is not a standard unit of measurement worldwide. It is mainly used in America. In this article, you will discover a wide variety of common items that weigh 1 pound.

Countless items around the world weigh approximately 1 pound. Below you will find 18 everyday things that weigh 1 pound:

It may surprise you that some of these everyday items weigh 1 pound. Read on to find out a bit more about each of them.

In the 1800s and early 1900s, parents would wrap their babies in cloth diapers. According to Diaper Jungle, it wasn’t until the 1940s that the first disposable, absorbent diaper was invented. Over the next twenty to thirty years, this concept would develop into what we know today as the disposable diaper. The average baby will use between 2,500 – 3,000 disposable diapers in one year. And a regular sized bag of between 15-20 diapers weigh about 1 pound.

The average man owns 12 pairs of shoes, while the average woman owns 27. Today, shoes are made to fulfill all different purposes, such as running, hiking, swimming, rock climbing, dancing, etc. But did you know that 200 years ago each shoe had to be made by hand and was identical to the other shoe in the pair?

As explained by the article “’Left Foot, Right Foot;’ The History of Shoes,” it wasn’t until the early 1800s that William Young invented the process for making a left and a right shoe.

On average across all types of shoes one shoe weigh about 1 pound.

Sweaters are long-sleeved tops made of a crocheted or knitted material that are generally worn over other articles of clothing to keep someone warm. Sweaters, worn by individuals of all ages, have a wide variety of sizes, styles, and purposes. The average woman’s sweater weighs 1 pound.

The average children’s coat weighs approximately 1 pound. It wasn’t until the early twentieth century that children’s clothing, including their coats, became gender-specific. Before that time, boys’ and girls’ coats were identical. As more and more jackets have been produced, fabric type, as well as comfort, function, and design, have become essential selling features for modern-day mothers.

Bathrobes are designed to not only keep your body warm after taking a bath or shower but are also made of absorbent materials that help dry your body. The Bathrobe Depot states that the “robe” in bathrobe is depicted as “dress” in French. However, bathrobes are gender-neutral.Today, bathrobes are not only great for keeping kids warm after a bath or going swimming, but they can serve as dress-up outfits, Halloween costumes, and more.

Leather gloves are worn for style as well as functionality. Leather, compared to other materials, provides more protection to the hand and fingers. To work correctly, leather gloves must fit comfortably. Leather gloves are often higher priced than other gloves because they tend to be a higher quality product.

A Block of Butter

A block of butter typically contains four sticks that equal ½ of a cup each. Butter is the fat of milk that is used in cooking and baking. To produce butter, you must agitate heavy cream until the fats separate from the liquid. Once this separation takes place, you are left with butter and buttermilk.

A Loaf of Bread

Bread, milk, and eggs are the three most purchased items in grocery stores every day. According to Our Daily Bread, the average American eats 53 pounds of bread each year. Nearly 12 million loaves of bread are sold each day. Of those 12 million, 3/4ths are white bread.

A Can of Soup

Canned soup is a convenient ready-to-eat item that was invented by Dr. John T. Dorrance. The only preparation required is adding a can full of milk or water to double the volume of the soup and then heating it on the stove to your desired temperature.

Three medium sized bananas weigh about 1 pound and eating bananas has many benefits. They include:

A Bottle of Salad Dressing

It wasn’t until the 14th century that the standardization of time began. Time was divided up into two twelve-hour parts, half of them nighttime and the other half daytime. Clocks quickly became an essential part of society in helping people measure time.

Walls With Stories discusses how the original pillow, which dates back to around 7,000 BC, was first made of stone. They were designed to keep heads off of the ground to prevent bugs from crawling up on people’s faces and into their mouths, ears, or noses while they slept. It wasn’t until more modern days that pillows became a comfort item for sleeping.

Wallpaper is a decorative paper applied to walls, floors, counters, cabinets, and more. It is made by taking paper and covering it in a thin layer of durable vinyl. From there, ink is applied to create different designs and pictures. Some wallpaper has paste pre-applied to the back of the paper before packaging and sale. This allows the wallpaper to stick to the wall with little effort on the consumer’s part.

The average dinner plate measures one foot across and is made of durable ceramic material. In modern days there are around twenty different types of materials used to make dinner plates, but on average most dinner plates weigh one pound.

The AA battery is the standard battery for the American National Standards Institute. AA batteries are one of the most common batteries used for electronic devices. Batteries were named based on their size. Put 20 AA batteries together, and you have 1 pound of batteries.

A football, whether it is used for American football, soccer, or rugby, weighs one pound. In football, there is a code of rules that defines not only what the weight of the ball should be, but also the pressure, circumference, and amount of air-filled space that should be in the ball.

Umbrellas, which have been around for thousands of years, used to be much heavier than they are today. In the early 1800s, an umbrella frame weighed approximately 10 pounds. About 20 years later, they were able to size it down to 1 ½ pounds. When the steel frame came out in the 1850s, umbrellas became one pound or lighter.

The average person handles over 140 items every single day. We are surrounded by things of different weights, sizes, shapes, colors, and textures. Next time you go to pick up your keys or grab a box of cereal, let yourself wonder, does this weigh 1 pound?